It's Not Just Trump: The 2016 Race Is Sounding More And More Violent 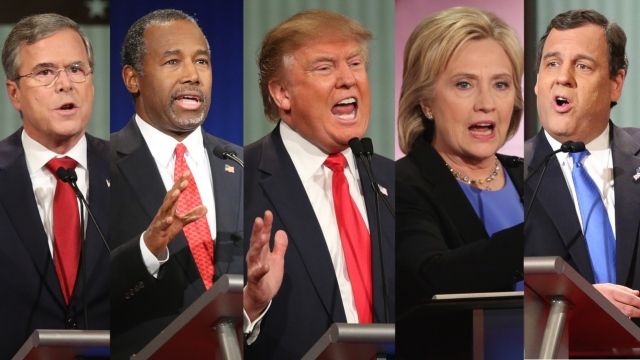 "I could stand in the middle of 5th avenue and shoot somebody and I wouldn't lose any voters," Donald Trump said at a campaign rally in Iowa.

Usually, this would seem really out of place in a presidential election. But, this presidential campaign has had a surprisingly violent subtext.

"I'd like to be on Homeland ... where I kill a terrorist with my bare hands," former Gov. Jeb Bush says in a new TV show on Showtime.

"The enemy soldier that threw the grenade that wounded me. But he's not around right now to talk to," former Sen. Jim Webb said in the first Democratic debate.

"My mother was trying to get me to wear something I didn't want to wear. I picked up a hammer, went to hit her in the head with it," Ben Carson told a crowd in September.

"Mr. President ... we are going to kick your rear end of out the White House come this fall," Gov. Chris Christie told a debate crowd.

"Putin's a bully and the most important and effective thing you can do to a bully is punch him in the face," former Gov. George Pataki said in December.

"Every time i see her on TV, I want to reach through and strangle her ..." a supporter said to former Secretary of State Hillary Clinton of Carly Fiorina. Clinton was criticized for not rebuking the statement.