What Happens If No Party Comes Out Ahead In Catalonia's Election 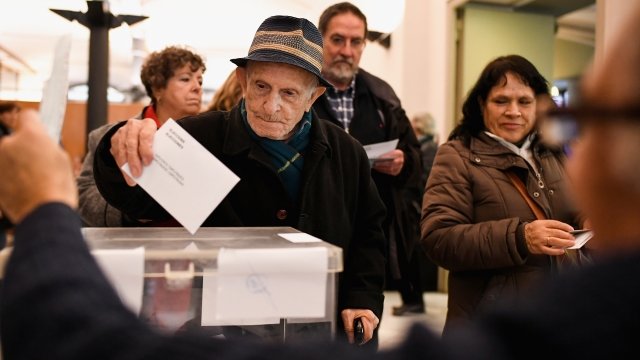 If no party wins a majority of seats in Catalonia's Parliament, parties will need to team up and form coalitions — which could take weeks.

The polls in Catalonia have been open for hours now, and it's very possible no one party will secure enough votes to win a majority of seats in the region's Parliament.

There are 135 seats in Catalonia's Parliament, so a party needs to win 68 of those seats to get an absolute majority. And with at least seven parties on the ticket, that's no easy feat.

So if no one party comes out ahead, parties will need to team up and form coalitions. The votes from the snap election go with the parties, so the coalition with the most votes gets the majority in Parliament.

Ousted Catalan leader Carles Puigdemont's government was made up of a coalition of pro-independence parties.

Negotiations to form coalitions could take weeks. And if no coalition can be formed or come out ahead, expect a second round of elections presumably sometime in 2018.