It's Been 6 Months Since The War In Ukraine Started 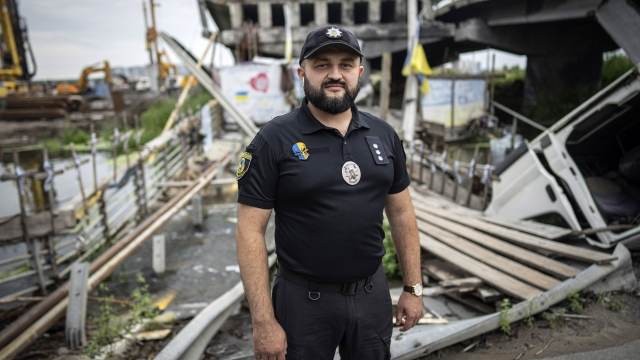 SMS
It's Been 6 Months Since The War In Ukraine Started
By Jason Bellini
By Jason Bellini
August 23, 2022
Ukrainian Deputy Prime Minister Iryna Vereshchuk sat down with Newsy to discuss the most dangerous part of the war against Russia.

A half a year after Russia shocked the world by firing missiles and rolling tanks toward the capital of Kyiv, Ukrainian Deputy Prime Minister Iryna Vereshchuk sat down with Newsy and issued a warning about what she says is the most dangerous moment of the war: the risk of Russia weaponizing Europe's largest nuclear power plant.

NEWSY'S JASON BELLINI: You don't think Russian President Vladimir Putin wants there to be a nuclear accident, or, heaven forbid, a nuclear meltdown? Because radiation would go to Russia as well.

According to Western officials and leaked photos, Russians are using the Zaporizhzhia nuclear power plant as a shield for their weapons.

"There are six nuclear power units there, and a detonation or explosion at such plants would be, without any exaggeration, a catastrophe of global scale," said Vereshchuk.

Nuclear blackmail at the Zaporizhzhia nuclear power plant is only one of Putin's tools.

Because Vereshchuk says there are other dangers. As a mother herself, she is sounding the alarm about Putin's forces taking thousands of Ukrainian children to Russia.

BELLINI: You said that Russians are deporting Ukrainian children to Russia. What is the future of these children?

VERESHCHUK: Russia acts in the "best traditions" of Nazism. They want and plan to change the children's identities. They're doing everything they can to make children forget the Ukrainian language, so that children are not brought up in the cultural environment where they were born. We need international support. We need the whole world to put pressure on Russia and Putin for these terrible crimes they are committing against Ukrainian children. You may have seen Putin's decree on simplifying the procedure for Russians to adopt these children. Those doing this will be criminals like Putin if this happens.

To avoid these dangers, the deputy prime minister is warning Ukrainians in Russian-occupied cities like Kherson to escape now.

BELLINI: Is that because it would be easier to liberate Kherson if there weren't so many civilians there?

VERESHCHUK: I once again call on them to leave. Escape from the enemy, who uses people as human shields in the fight against the Ukrainian Army.

They will also escape what will be a harsh winter in cities destroyed by Russian missiles with no power, food or water.

VERESHCHUK: I am preparing our team to help people survive the winter period, in particular in the Kherson region. We Understand that even when we push the enemy out of these areas, the people there will be in dangerous conditions.

Six months in, the danger remains that of day one: Not knowing how far Putin is willing to go to try to crush Ukraine. They expected that the president of Ukraine would flee, the government would fall, and they would be greeted here with flowers. These are Putin's strategic mistakes.