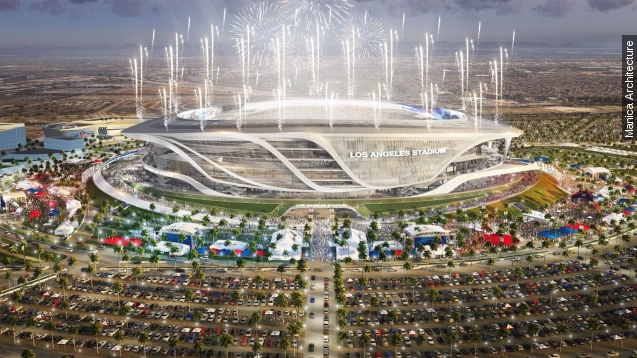 SMS
It's Almost Judgment Day For 3 NFL Teams Pining For A Move To LA
By Carter Woodiel
By Carter Woodiel
December 3, 2015
NFL owners say they'll have a special meeting to discuss a Los Angeles relocation plan, putting the NFL closer than ever to LA.
SHOW TRANSCRIPT

In the ongoing saga about whether or not the NFL will move a team to Los Angeles, judgment day looks to be set.

After discussing the matter at their quarterly meeting in Texas, NFL owners say they will reconvene on Jan. 12 for a special two-day meeting, which will likely include a vote on moving a team — or teams — to LA. (Video via KMOV)

"It's important for us to address this matter, address it in a deliberate [way], but also make sure we make a decision as soon as possible," NFL Commissioner Roger Goodell said Wednesday.

In the running are the San Diego Chargers and Oakland Raiders, who have plans to share a stadium in nearby Carson, as well as the St. Louis Rams, who are pushing for a move to Inglewood, California.

Of the three teams involved, the Rams and their owner, Stan Kroenke, appear to be in the worst position moving forward because they're facing the strongest push of the three to keep their team in town. (Video via WXOS)

This includes a 2-month-old deal with National Car Rental for the naming rights to a new stadium, should the Rams stay in St. Louis. (Video via HOK)

By comparison, public funding for a new stadium in San Diego still requires voter approval, and the Raiders have no plan for a new Oakland stadium.

Three-fourths of NFL teams — that's 24 of 32 votes — would need to vote yes to move a team to Los Angeles, something that isn't guaranteed.

No matter what winds up happening, owners have an incentive to get the issue resolved quickly. The earlier a move to LA gets the green light, the more time there'll be for things like launching a marketing campaign and selling season tickets.

Teams will be able to officially submit their proposals for relocation starting Jan. 4.