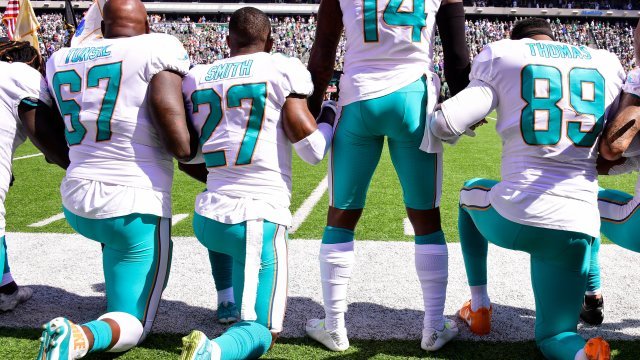 A White House official said NFL players should "do free speech on their own time." But historically, sports and politics have gone hand in hand.

President Donald Trump reopened a dormant front in the culture wars over the weekend by weighing in on NFL players protesting during the national anthem.

Some fans say he's politicizing the NFL and that they'd rather sports and politics were kept separate.

Trump suggested NFL owners should fire players who protest at games. He was likely alluding to Colin Kaepernick, the NFL player who has repeatedly kneeled during the playing of the national anthem at games in order to protest racial inequality. Trump reiterated his comments the next day on Twitter.

That prompted players and owners from nearly every NFL team to unite in protest Sunday.

The White House has defended Trump's statements, saying the NFL isn't the place for protests. Treasury Secretary Steven Mnuchin said players "can do free speech on their own time."

Dan Orlovsky was signed to the Los Angeles Rams ahead of Colin Kaepernick, even though his numbers are worse.

But mixing sports and politics isn't actually a new idea.

Olympic medalists Tommie Smith and John Carlos each raised a black-gloved fist during the national anthem at the 1968 Summer Games. The gesture is recognized as a "black power" salute. They were later suspended from the U.S. Olympic Committee.

And the NFL is hardly apolitical: The Sunlight Foundation reported the league's employees made $1.5 million in political contributions in 2011 and 2012, mostly to the Republican party.

The league also didn't require players to take the field during the anthem until 2009 — and there might have been more than simple patriotism behind the change.

According to a 2015 report, the Department of Defense has paid millions of dollars to the NFL, NASCAR and four other sports leagues since 2012 in exchange for patriotic displays at sporting events. This was reportedly meant to boost military recruitment.