It Isn't Clear What The Greeks Are Voting On 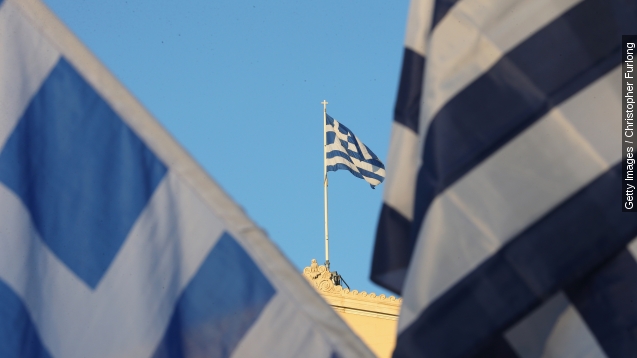 SMS
It Isn't Clear What The Greeks Are Voting On
By Steven Sparkman
By Steven Sparkman
September 17, 2015
Two of Greece's major parties are committed to Europe's bailout deal and the austerity that comes with it. So what will the vote decide?
SHOW TRANSCRIPT

Greeks are facing their third nationwide trip to the polls this year, and all three have primarily been about the same issue: the future of Greece's economy. Only this time, things are kind of backwards.

The country's former prime minister Alexis Tsipras is in a strange position. He came to power in January after promising to fight tooth and nail to get some economic relief. After five years of austerity brought on by Greece's creditors' demands, the country's unemployment rate had more than doubled, and wages were dropping. (Video via Syriza, Deutsche Welle)

Those creditors, including the EU and the European Central Bank, refused to budge, even after Greeks voted heavily against austerity in a referendum in July. In the end, with Greece running out of money and the only alternative being an exit from the euro, Tsipras accepted a new bailout package — along with more austerity. (Video via European Central Bank, ERT)

Then he resigned last month in the hopes that a new election would earn him more support, but Tsipras can't really position himself as the anti-austerity leader anymore. Now, he's the leader who accepted more austerity, and polls show his Syriza party has actually lost support.

Much of that support is going to the New Democracy party, which held power before Tsipras's takeover in January. Party head Vangelis Meimarakis has been campaigning mostly by accusing Tsipras of messing things up even more. (Video via New Democracy)

"Tsipras lied a lot last January. Nine months ago, Greece had a fiscal surplus and the prospect of growth was in sight. Now, the country is back in the red with high deficit and high unemployment," Meimarakis told Euronews.

The two parties are polling pretty closely, and neither one looks like it will be able to form a government without at least one other party's help. And in a debate this week, both leaders ruled out working together. (Video via ERT)

But what's odd is that, despite the race being neck and neck, it's not clear what exactly is at stake. Both leaders want to stay in the euro, both are committed to implementing more unpopular bailout reforms and both say they'll do what they can to get some form of debt relief.

The vote will determine who is at the helm when some of the details are decided, but if the result is close, the winning party won't have much of a mandate. (Video via European Commission)

What the election will do is give smaller parties a chance at more Parliament seats. A new party called Popular Unity, made up of exiles from Syriza, represents the far left in this election, and the far right, anti-immigration Golden Dawn is expected to continue its slow growth. (Video via Bloomberg)