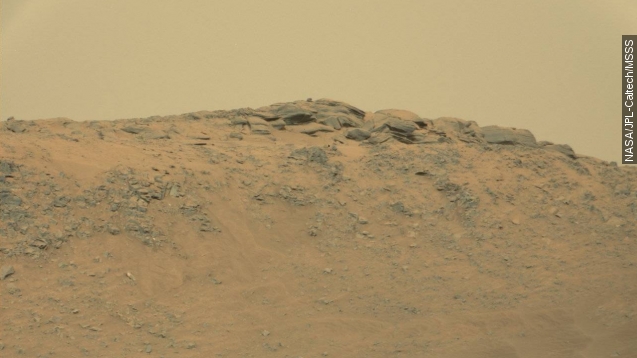 SMS
It Could Be A Pile Of Rocks Or It Could Be Buddha's Face
By Katie Link
By Katie Link
October 19, 2015
There may or may not be a Buddha statue in this picture of Mars. But if you do see it, blame your brain.
SHOW TRANSCRIPT

What do you see in this picture? If you're thinking, "Oh it's obviously a Buddha-like statue on Mars," oddly, you're not alone.

A UFO blogger says the photo taken by NASA's Curiosity Rover proves that Mars once had intelligent life, but "NASA doesn't want anyone to know the truth, because they will be asked to share the info and technology that they have found."

We're not even going to comment on that, but one thing is certain: Humans are really good at finding things that look human. It's called pareidolia.

Whether it's a face like the man in the moon or a human-shaped object like the famous "woman on Mars," scientists say we're primed to focus on things that look vaguely human — like shapes on pancakes.

"Some people can see Jesus, some people are saying, 'Oh, he looks like Abraham Lincoln,' a hillbilly, some are even saying Charles Manson," restaurant owner Karen Hendrickson said. (Video via KCAL)

According to NPR, researchers have measured the part of the brain that engages when you recognize a real face. Well, it turns out that area also lights up when people think they see faces, as well.

And once your brain thinks it sees something like a statue on Mars, researchers say it's nearly impossible to unsee it.

This video includes images from Wendy / CC BY 2.0.