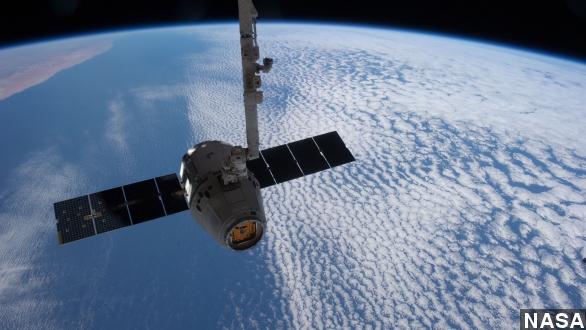 By Mikah Sargent
April 12, 2014
NASA is weighing its options after a backup computer malfunctioned on Friday. Astronauts may have to replace the device during a spacewalk.
SHOW TRANSCRIPT

​NASA is weighing its options after a backup computer on the International Space Station failed to respond to commands Friday. Astronauts might have to replace the device during a spacewalk.

The device, which helps control the station’s Mobile Transporter rail car pictured here, is called a multiplexer demultiplexer. It takes commands from the computer and routes them to external systems.

NASA issued a statement confirming the crew was in no danger from the malfunctioning device, but are trying to determine “whether the station has enough redundancy to permit the launch” of a SpaceX cargo craft.

A craft, which NBC reports contains “about 4,600 pounds of supplies and equipment, including scientific experiments and the legs for the station's Robonaut 2 android.”

It is important to note the device is a backup — the prime computer is functioning normally, but the team wants to take all possible precautions. (Via NASA)

The SpaceX cargo craft will be caught and berthed by the station’s robotic arm. NASA says the team is deciding whether there are enough backup systems in place for the robotic arm to warrant the launch.

Space.com points out “SpaceX's Dragon launch has already been delayed nearly a month.” Officials are working to get the necessary supplies and equipment aboard the ISS swiftly and safely.

NASA says as of now, the craft is still scheduled to launch on Monday with an anticipated arrival Wednesday.