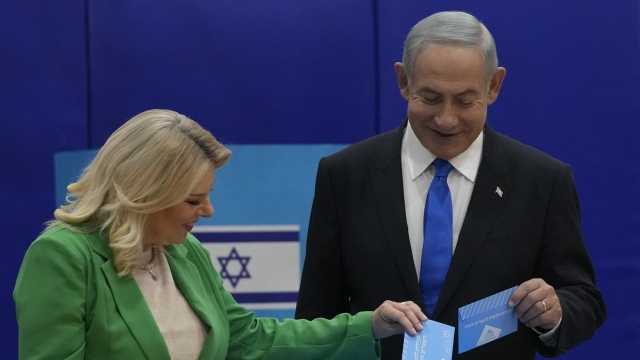 Israel's fifth election in three years has mired the country in an unprecedented political crisis that has eroded faith in democratic institutions.

For the fifth time since 2019, Israelis were voting in national elections on Tuesday, hoping to break the political deadlock that has paralyzed the country for the past three and a half years.

Again, the vote centers around former premier Benjamin Netanyahu's fitness to lead while he faces corruption charges. And while polls predict another stalemate, Netanyahu is looking to the surging power of far-right lawmaker Itamar Ben-Gvir to propel him back to power.

Election officials said that by 2 p.m. local time, turnout stood at 38.9%, the highest at that time since 1999. But there was no breakdown of the vote that might show who was benefitting.

Netanyahu's main rival is the man who helped oust him last year, the centrist caretaker Prime Minister Yair Lapid, who has warned against the nationalist and religious alliance that would emerge should Netanyahu return to power.

“Vote for the state of Israel, and for the future of our children,” Lapid said after casting his ballot in the upscale Tel Aviv neighborhood where he lives.

After he cast his vote, Ben-Gvir promised that a vote for his party would bring about a “fully right-wing government” with Netanyahu as prime minister.

Violent scuffles between Jewish and Palestinian groups erupted inside the Old City before the parade began.

Ben-Gvir, who has been convicted of incitement for his anti-Arab rhetoric and has promised to deport Arab lawmakers, has seen his clout rise in the polls ahead of the vote and has demanded a key portfolio should Netanyahu be tapped to form a government.

With former allies and proteges refusing to sit under him while he is on trial, Netanyahu has been unable to form a viable majority government in the 120-seat Knesset, or parliament.

“I'm a little worried," Netanyahu said after voting. "I hope we end the day with a smile.”

Netanyahu's opponents, an ideologically diverse constellation of parties, are equally hamstrung in cobbling together the 61 seats needed to rule.

That impasse has mired Israel in an unprecedented political crisis that has eroded Israelis’ faith in their democracy, its institutions and their political leaders.

“People are tired of instability, of the fact that the government is not delivering the goods,” said Yohanan Plesner, a former legislator who now heads the Israel Democracy Institute, a Jerusalem think tank.

Netanyahu has been charged with one count of bribery and three counts of fraud and breach of trust.

Buoyed by his followers’ almost cult-like adoration, Netanyahu, 73, has rejected calls to step down by his opponents, who say someone on trial for fraud, breach of trust and accepting bribes cannot govern. Netanyahu denies wrongdoing, but embarrassing details from his ongoing trial repeatedly make front page news.

In Israel’s fragmented politics, no single party has ever won a parliamentary majority, and coalition-building is necessary to govern. Netanyahu’s most likely path to the premiership requires an alliance with extreme nationalists and religious ultra-Orthodox parties.

These parties would demand key portfolios in a Netanyahu government, and some have promised to enact reforms that could make Netanyahu’s legal woes disappear.

The ultranationalist Religious Zionism party, whose provocative top candidate Ben-Gvir is a disciple of a racist rabbi who was assassinated in 1990, has promised to support legislation that would alter the legal code, weaken the judiciary and could help Netanyahu evade a conviction. Ben-Gvir, promising a tougher line against Palestinian attackers, this week announced he would seek the Cabinet post overseeing the police force.

Critics have sounded the alarm over what they see as a threat to Israel’s democracy.

“If Netanyahu is triumphant,” wrote columnist Sima Kadmon in the Yediot Ahronot daily, “these will be the final days of the state of Israel as we have known it for 75 years.”

Netanyahu’s Likud party has tried to tamp down worries, saying any changes to the legal code won’t apply to Netanyahu’s case and that the more extreme elements of his potential coalition will be reined in.

Netanyahu, currently opposition leader, paints himself as the consummate statesman and only leader capable of steering the country through its myriad challenges. Polls say the race is too close to predict.

Netanyahu was ousted last year after 12 years in power by the diverse coalition forged by Lapid, Netanyahu’s main challenger.

The coalition, made up of nationalists who oppose Palestinian statehood, dovish parties that seek a peace agreement, as well as — for the first time in the country’s history — a small Arab Islamist party, united over their distaste for Netanyahu. But that coalition collapsed this spring because of infighting.

The centrist Lapid, a former author and broadcaster who became premier as part of a power-sharing agreement, has portrayed himself as an honest and scandal-free change from the polarizing Netanyahu.

In his short term as caretaker leader, Lapid welcomed President Joe Biden on a successful visit to Israel, led the country in a brief military operation against Gaza militants and signed a diplomatic agreement with Lebanon setting a maritime boundary between the enemy nations.

Still, Lapid’s chances to return to leadership are shaky. He is relying on voters from Israel’s Palestinian minority, who make up one fifth of the population. Their turnout is predicted to reach historic lows, but if they unexpectedly do come out to vote, that could slash the Netanyahu camp’s numbers.

“We must vote," said Jiwad Abu Sharekh, 66, a Palestinian citizen of Israel from the mixed Arab-Jewish city of Lod. "If you don’t vote, the right wins. We want to stop the extremists on the right.”

After the votes are tallied, the parties have nearly three months to form a government. If they can’t, Israel will head to yet another election.

“I hope this time it will be final,” said Avi Shlush, a voter in Tel Aviv. “But it will not be final. We are heading to another election.”