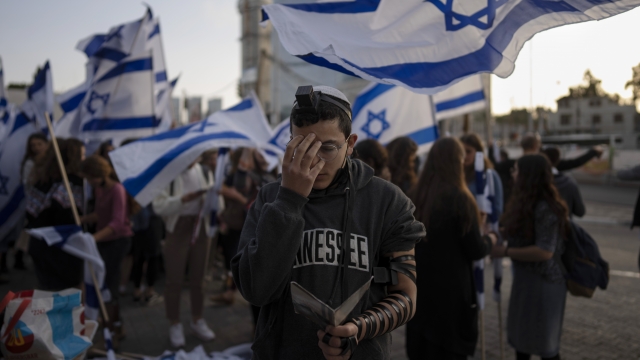 SMS
Israelis Feeling 'Insecure' After 5th Terror Attack In 2 Weeks
By Alexandra Miller
By Alexandra Miller
March 30, 2022
Outside of the war, this is the deadliest wave of violence Israel has seen in years, with five more civilians killed Wednesday.

Israelis were on edge Wednesday, as the country mourns the deaths of five more civilians in the fifth terror attack in just two weeks.

"The strong sense we have here right now is the sense of insecurity and the understanding that there could be additional terror attacks anywhere in the country really," said Avital Leibovich, director of the American Jewish Committee in Israel.

There’s been no immediate claim of responsibility for this attack, but ISIS operatives killed two people and injured six Sunday in Hadera.

Last week, another ISIS adherent stabbed and killed four people in Beersheba. There have been several stabbing attacks in Jerusalem this month.

All incidents have been outside of the disputed territories.

"For someone who wants to take to carry out an attack, they're not necessarily limited by geography," said Khaled Elgindy, director of the program on Palestine and Palestinian-Israeli affairs at the Middle East Institute. "I think the purpose of terrorism is to make the targets in this case, Israel and Israelis, to feel insecure, and the way to do that is to do that in Israeli territory, as opposed to simply attacking army targets in the occupied territories."

Outside of war, this wave is the deadliest Israel has seen in years.

Shehab News Agency has repeatedly shown celebrations in the streets and treats handed out as these attacks have unfolded.

Elgindy says he believes one factor could be deaths of several Palestinians by Israeli forces since the beginning of the year.

"It's not surprising as the occupation sort of entrenches itself that eventually we will see acts of terrorism in response," Elgindy said.

But it might be bigger than that, as Israel is making strides in normalizing relations with Arab nations. Just this week they held the Negev Summit with the foreign ministers of Egypt, Morocco, Bahrain, the UAE and U.S. Secretary of State Antony Blinken.

"There are elements who are not approving and are not happy of this new partnerships that we have in the region, and so this could also have some sort of trigger of terror attacks," Leibovich said.

"There's no question that, that a great many Palestinians feel abandoned by the international community by their Arab brethren, who are moving very quickly to to embrace Israel, without much regard for Palestinian rights," Elgindy said.

All of this as Ramadan, the holiest month on the Muslim calendar, begins Friday. The Passover and Easter holidays are in mid-April. Both sides are expecting an uptick in violence during this time.