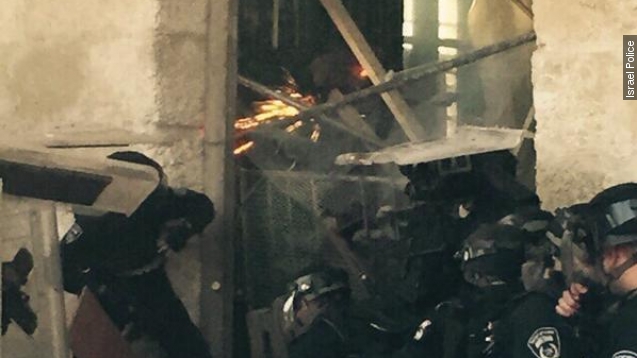 The Al-Aqsa mosque in Jerusalem is once again a flashpoint for Israeli-Palestinian tensions. Israeli police wielding tear gas and stun grenades clashed with Palestinian youths gathered inside the mosque, who threw rocks and fireworks at the officers.

Israeli Police spokesperson Mickey Rosenfeld told i24News, "The Israeli police had specific warnings and intelligence that there were going to be disturbances from inside the Al-Aqsa mosque. Our forces entered the Temple Mount area. Immediately they were confronted by Israeli Arabs who threw stones and rocks at them."

Police say they entered the religious site to quash plans to disrupt celebrations of the Jewish New Year, Rosh Hashanah. Palestinian President Mahmoud Abbas condemned the clashes as "aggression against the faithful."

The mosque is technically administered by Jordan and Palestine, but sits on territory controlled by Israel. It's been the scene of many similar clashes in recent years, generally whenever Jewish worshipers attempt to enter the compound during a holiday.

Israeli authorities have cracked down on violent incidents by restricting access to the site, often banning worshipers between the ages of 18 and 50. Israel's defense minister prohibited two Muslim groups from entering the compound several weeks ago, claiming they were disrupting public order. (Video via Al Jazeera)

Jewish worshipers can visit the compound under heavy guard, but are not allowed to pray there. Jewish groups have challenged that prayer ban in recent years, which has angered some Palestinians.