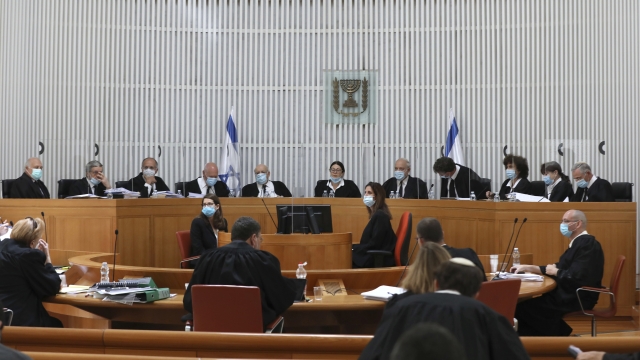 Israel's Supreme Court continued discussions for the second day over whether Prime Minister Benjamin Netanyahu can remain in office while facing corruption charges.

The high court is considering a pact between Netanyahu and his main rival, Benny Gantz, and whether it's legal. The two signed a deal to form an emergency government last month because of the coronavirus pandemic. Under the deal, Netanyahu and Gantz would take turns serving as prime minister.

The judges have reportedly already raised concerns about parts of the agreement, including the exclusion of senior government appointments, lack of opposition lawmakers in certain parliamentary committees and an agreement not to promote legislation unrelated to the coronavirus for six months.

A ruling against any part of the deal could trigger another general election, according to Netanyahu's supporters. It would be Israel's fourth vote since April 2019.

On Sunday, dozens of people holding Israeli flags protested near the supreme court building. Human rights groups and political parties filed petitions calling on the high court to nullify the coalition deal and bar Netanyahu from being prime minister.

A verdict is expected by Thursday, the same day Netanyahu and Gantz are supposed to formally present their new government.