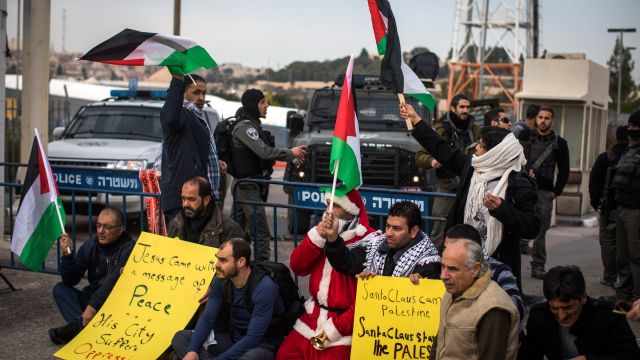 SMS
Israel Has A Travel Ban, Too
By Jake Jones
By Jake Jones
March 8, 2017
Israel's Parliament passed a law that denies entry to anyone who has called for others to boycott Israel or its territories.
SHOW TRANSCRIPT

Let's talk about travel bans. And no, not just here in the U.S.

Israel's Parliament passed a law that denies foreigners entry if they make a "public call" for any type of boycott against the country or its territories.

It's a swipe at the BDS campaign, which stands for "boycott, divestment, sanctions." The group is a Palestinian-led opposition to Jewish settlements in the West Bank.

The bill does not specify what counts as a "public call" to boycott. It also doesn't say how the law would be enforced.

The bill isn't quite the same as President Trump's travel ban on six Muslim-majority nations. But it's born from a similar motivation — and it has attracted similar criticisms.

Proponents of the U.S. and Israeli travel bans say each country has the right to protect itself from those who would do it harm. To them, blocking travelers with what they believe are harmful ideologies is crucial for national security.

But Trump's initial travel ban was halted in court over claims it unfairly discriminated against religion by targeting Muslims.

Similarly, Israel's travel ban is under fire from Jewish groups that claim the law unfairly stifles political speech and is undemocratic.

Recently, Israel denied entry to a Human Rights Watch employee for the second time based on his previous support of BDS. The country's Foreign Ministry later said that denial of entry was a mistake.

Some have claimed the law could allow for cherry-picking of people's social media posts about Israel to block their entry. A sponsor of the bill from the country's centrist Kulanu party called those claims "simple demagoguery."

Israel's Justice Ministry tried and failed to exempt Palestinians who live within Israel's borders from the law, which could make the ban tough to defend in court.