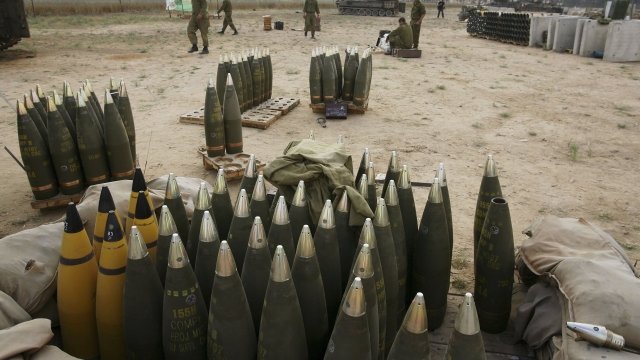 Missiles suspected to have come from Israel targeted an area near Damascus, Syria, on Tuesday night.

Syrian state media released video of the missile attacks and said air defenses intercepted two of the missiles. The U.K.-based watchdog group Syrian Observatory for Human Rights reported the missiles targeted a Syrian army base and killed at least 15. At least eight of them were reportedly Iranian and either members of Iran's Revolutionary Guard Corps or pro-Iranian militia fighters.

The base was home to an Iranian weapons depot, according to the monitoring group's director. Lebanese militant group Hezbollah, which is supported by Iran, has been active in the Syrian civil war.

Tensions are high in the region after President Donald Trump pulled the U.S. out of the Iran nuclear deal, a move Israeli Prime Minister Benjamin Netanyahu has praised. Netanyahu met with Russian President Vladimir Putin on Wednesday to discuss the Syrian conflict.