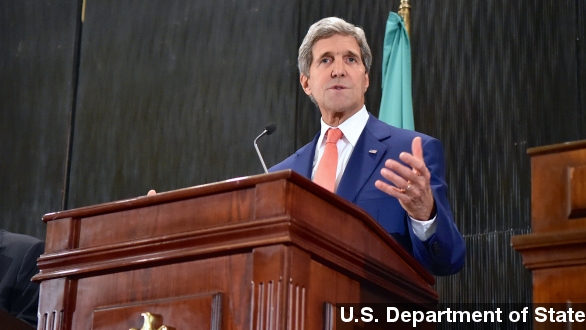 By Elizabeth Hagedorn
July 29, 2014
U.S. Secretary of State John Kerry has been labeled everything from "naive" to "reckless" and even compared to an alien in Israeli media coverage.
SHOW TRANSCRIPT

Israeli media commentators have some choice words for America’s top diplomat. (Via U.S. Department of State)

U.S. Secretary of State John Kerry has been compared to “a blind person groping for the ladder to climb down from the roof but instead falling down the chimney.” (Via Israel HaYom)

Accused of “encouraging and rewarding jihadist terror" and described as "an alien, who just disembarked his spaceship in the Mideast."  (Via Ynetnews, Haaretz)

Harsh words out of a nation that's been a traditional ally of the U.S. This,  as Kerry has been trying to broker a long-term cease-fire between Israel and Hamas — but Israeli commentators have characterized his efforts as naive and even reckless.

​Friday, Israel's cabinet unanimously rejected Kerry’s cease-fire proposal — a plan many observers said was not much different than the Egypt-backed proposal Israel had previously agreed to. (Via U.S. Department of State)

Over the weekend a leaked copy of Kerry’s cease-fire proposal was made public. Israeli media claimed the plan rewarded Hamas and ignored Israel’s demands, including the demilitarization of Gaza. (Via The Times of Israel)

Kerry “ruined everything,” in the words of a columnist wrote in left-leaning Israeli newspaper Haaretz:  "Very senior officials in Jerusalem described the proposal that Kerry put on the table as a strategic terrorist attack."

Kerry's also been taken to task for bringing Turkey and Qatar — both allies of Hamas — to the negotiating table. (Via U.S. Department of State)

And his hot-mic moment from earlier this week probably didn’t help his case either. "It's a hell of a pinpoint operation." (Via Fox News)

The Telegraph offers some insight into the growing criticism: “Some of this may be payback for what has been seen in Israeli eyes as previous diplomatic gaffes committed by Mr Kerry – such as warning that Israel would face a future campaign of de-legitimisation or evolve into an apartheid state if it failed to make peace with the Palestinians.”

The State Department and White House officials have tried to downplay the criticism, with National Security Advisor Susan Rice on Monday calling the reports and leaks to Israeli press "misleading.” Israel’s ambassador to Washington also came to Kerry’s defense, saying the criticism was "unwarranted."