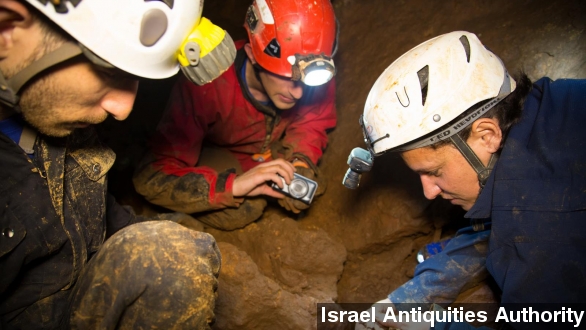 Spelunkers in northern Israel stumbled across a trove of ancient artifacts, dating back thousands of years.

The cave explorers found silver jewelry and, crucially, coins. The coins are important because they allowed archaeologists to date the trove to the time of Alexander the Great. (Video via Mako)

The Macedonian king conquered the region more than 2,000 years ago, and archaeologists theorize the trove was hidden by people seeking refuge from the wars that followed his reign.

"The two hoards can teach us about a new phenomenon. We're just now beginning to understand it, about refugees who escaped into natural caves in the Galilee," the Israel Antiquities Authority's Eitan Klein explained. (Video via International Business Times)

The discovery comes less than a month after another group of civilians chanced upon another ancient treasure in the country.

Divers off Israel's Mediterranean coast at Caesarea spotted thousands of gold coins on the seabed, probably the remnants of an ancient merchant ship. (Video via ODN)

The Israel Antiquities Authority dated those back to the Fatimid Caliphate around 1,000 years ago, the central government of which was based in Egypt.

Officials from the IAA told CNN they had found other artifacts in the same cave dating back to the Bronze Age 5,000 years ago, and the Chalcolithic period 6,000 years ago as well.

This video includes an image from the Israel Antiquities Authority.