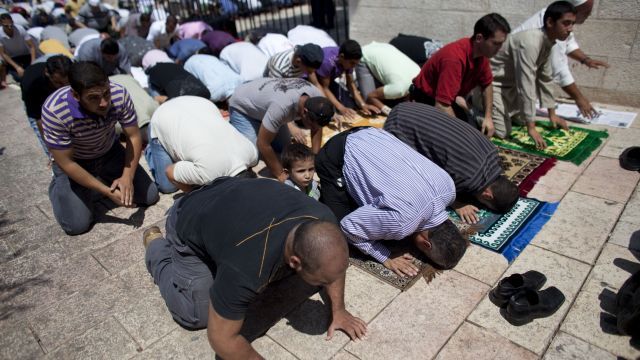 SMS
Some Israeli Lawmakers Want To Quiet Muslims' Call To Prayer
By Lindsay Gloor
By Lindsay Gloor
December 12, 2016
The so-called "muezzin bill" initially banned all loud religious calls, but the bill was amended to exclude the Jewish horn of Sabbath.
SHOW TRANSCRIPT

Many Muslims in Palestinian neighborhoods don't even think about the call to prayer they hear daily. But some of their neighbors in Jerusalem think the religious chant is just too loud.

That's why Israeli lawmakers who say they want to protect residents' quality of life introduced the so-called "muezzin bill."

The Islamic call to prayer, or Adhan, is repeated five times a day — from sunrise to sunset, and it is chanted by a Muslim man called a muezzin.

The bill would ban Muslims from using loudspeakers to amplify their call to prayer.

Israeli Prime Minister Benjamin Netanyahu stated in a press conference, "Israel is a country that respects freedom of religion for all faiths. Israel is also committed to defending those who suffer from the loudness of the excessive noise of the announcements." He went on to say that he has received complaints from all religions, including Muslims, about the Adhan.

Although it was initially written to include all loud religious calls, its supporters agreed to amend it to protect horns played to signal the start of the Jewish Sabbath.

In a city rich with historical religious conflict, it's not surprising the bill struck a nerve.

The Israeli president called for interfaith discussion to solve the issue, rather than binding laws. Other critics say the bill is a populist attack on Muslims.

Supporters hope the bill will pass in the next few weeks.