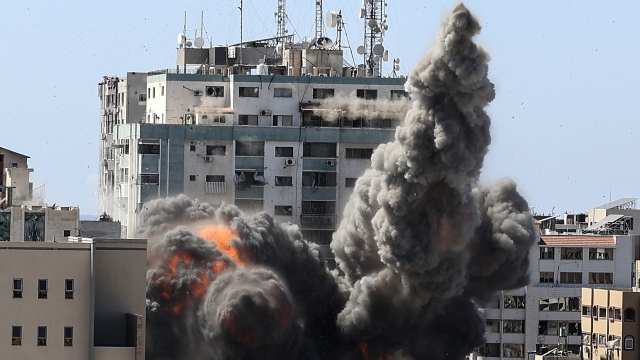 An Israeli airstrike on Saturday destroyed a Gaza City apartment high-rise that included offices of The Associated Press, Al Jazeera and other media outlets.

Israeli military officials ordered the building evacuated nearly an hour before the strike - which brought down the 12-story structure into a cloud of dust.

The strike came hours after another Israeli air raid on a Gaza refugee camp killed at least 10 Palestinians - mostly children. The Associated Press reported that the attack, killing members of an extended family, was the deadliest single strike so far in the escalating conflict between Israel and the Hamas militant group.

Militants have fired hundreds of rockets into Israel, killing eight people. The sustained Israeli military offensive, including bombings in the occupied Gaza Strip, has killed at least 139 people. The AP said the dead include 39 children and 22 women.

The violence has extended to the other occupied Palestinian territory - the West Bank. Israel forces Friday shot and killed 11 people amid widespread protests, with some demonstrators hurling gasoline bombs at soldiers.

"We fully support Israel's legitimate right to defend itself, Secretary of State Antony Blinken said. "We've condemned and I condemn again the rocket attacks in the strongest possible terms. We believe Palestinians and Israelis equally deserve to live with safety and security."

Prime Minister Benjamin Netanyahu said Hamas will pay a "very heavy price" for the some 2,000 rockets they have fired since Monday - most of which have been intercepted. But the exploding violence is stirring fears of a new Palestinian "intifada" uprising -- and sustained conflict and bloodshed.