Team Israel Is Shocking Everyone At The World Baseball Classic 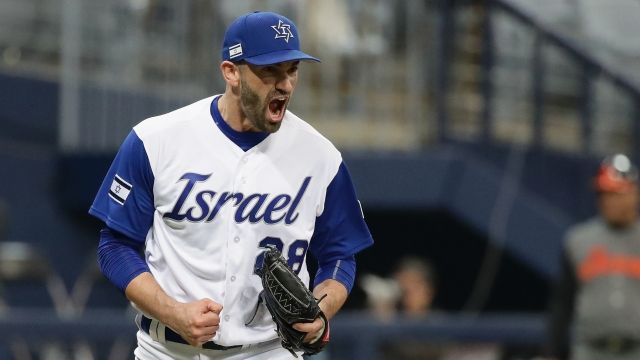 A country that hardly plays baseball at all just went undefeated in the first round of the World Baseball Classic.

Team Israel started 3-0 to the surprise of ... pretty much everyone. And as you might expect, there's more to this than meets the eye.

And since anyone who's Jewish can be granted Israeli citizenship, any Jewish ballplayer can play for team Israel — no matter where they live.

"It's nice to play on a team that has a common goal and a common thing in common that we're all Jewish," utility player Cody Decker told WLIE at September's qualifying tournament in Brooklyn, New York. "Until this, in 2012, I've never played on a team with more than two Jewish guys on it at a time, and I was usually one of those dudes."

Most of the team is made up of American minor leaguers. Only a handful are on a big-league 40-man roster. The team's one native Israeli is a 38-year-old pitcher who works at a winery in New York.

Commissioner Rob Manfred is trying to speed up the game with some rule changes, but players have pushed back.

The team got pretty creative tracking players down, as one shortstop can attest.

"They went on Facebook, they looked me up, saw a picture of my mom. They clicked my mom's Facebook; they saw she's from New York. A lot of Jewish people live in New York, apparently," shortstop Scott Burcham told KMIR.

It's not like the WBC competition wasn't stiff. Israel knocked off South Korea and Taiwan — two countries big on baseball and have professional domestic leagues.

Team Israel even has an unofficial mascot, the Mensch on the Bench; they hope he'll make a trip to the championship.