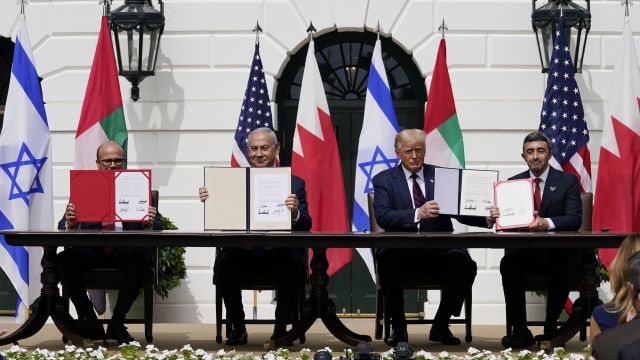 An historic afternoon at the White House as TWO arab nations signed peace deals with Israel.

Israeli Prime Minister Benjamin Netanyahu and foreign ministers from both The United Arab Emirates and Bahrain signed agreements, known as the Abraham Accords, to normalize relations with Israel.

The White House also invited both Democratic and Republican members of Congress in a rare show of bipartisanship. Both House Speaker Nancy Pelosi and Senate Minority Leader Chuck Schumer did not attend the ceremony.

President Trump says his administration is working to secure more peace deals with other countries in the Middle East.

"In Israel's entire history there have only been two such agreements, now we have achieved two in a single month and there are more to follow," the president said.

The world leaders signed copies of each document written in English, Arabic and Hebrew.