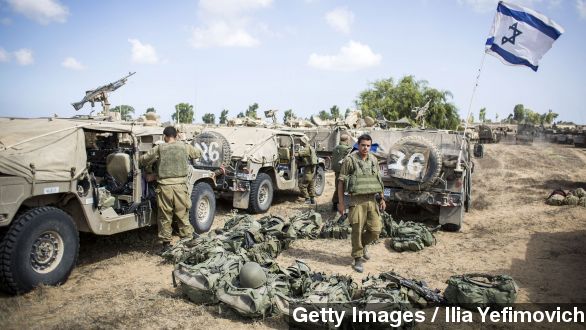 SMS
Israel Shuts Gaza Border Crossings In Security Effort
By Jill Ornitz
By Jill Ornitz
November 2, 2014
Israel has closed its borders to Gaza after a rocket was launched into Israeli territory on Friday.
SHOW TRANSCRIPT

Israel announced it's closing its two operating border crossings to the Gaza Strip indefinitely after a projectile was fired into Israel Friday.

No injuries or damage were reported. This is the second case of a rocket being fired into Israeli territory since an August cease-fire ended this summer's 50-day war. (Video via Al Jazeera)

According to the Israel Defense Forces, only in cases of extreme humanitarian need will the Erez Crossing be opened.

Israel now joins Egypt in closing off Gaza as violence in the area continues.

JEWISH NEWS ONE: "Egypt's Rafah border crossing into the Gaza Strip has been closed by policemen who have been angered by the abduction of several of their colleagues in the Sinai desert by suspected Islamist militants."

The Egyptian Army bulldozed homes in the crowded border town of Rafah to set up a barrier between Egypt and Gaza. (Video via Euronews)

The demolition was part of increased security measures approved by the Egyptian government to stop the flow of militants and weapons in and out of the country.

As an Egyptian researcher told The Telegraph, the demolition is viewed as "collective punishment" for Rafah's residents and could actually increase sympathy for militant groups.

Israel too has been accused of this before. The IDF closed a crossing in August because of rocket attacks, halting the delivery of truckloads of food,water and medical supplies.

These closures come as tensions and violence have increased in Jerusalem, resulting in the closure of the city's hotly-contested holy site, The Temple Mount.