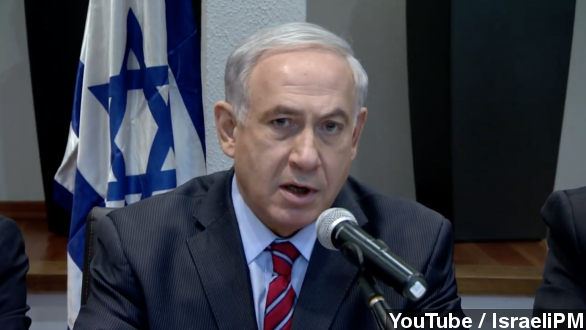 Israeli Prime Minister Benjamin Netanyahu is blaming Hamas for the suspected kidnapping of three Jewish teenagers in the West Bank.

Earlier, Netanyahu only said a terrorist organization was behind the kidnapping and that the Palestinians would be responsible for the teens' safety. Now, he's taking aim at Hamas for their disappearance. (Via YouTube / IsraeliPM )

Netanyahu isn't the only one blaming the Islamist militant group. An Israel Defense Forces spokesperson told The Times of Israel: "According to our current evidence we know that Hamas is responsible for the abduction."

But Hamas is denying responsibility. According to The Jerusalem Post, a spokesman called the accusations "stupid."

The three teenagers, between 16 and 19 years old, went missing when police say they were likely hitchhiking on their way home from school. Though unconfirmed by the State Department, multiple outlets report one of the teens is a U.S. citizen. (Via Al Jazeera)

As the search for the students grows, Haaretz reports security is tightening. Three border crossings into Gaza have been closed and police have arrested 80 Palestinians — including members of Hamas.

Netanyahu has spoken on the issue several times over the past couple days. According to Bloomberg, the prime minister has asked the country's army to use "all means" to make sure the teens are found safe. But an Israeli political science professor says he's worried it could lead to more conflict.

"Israel and the Palestinians are on the edge of an abyss​. ... This could have the dynamic of action, retaliation and then another action and could easily take the parties into a vicious cycle."

Two smaller, lesser-known terrorist groups have claimed responsibility for the kidnapping, but The Times of Israel reports it's not clear whether those claims are authentic.