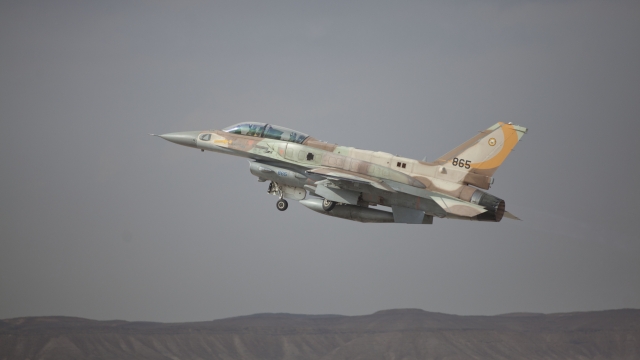 SMS
Israel Resumes Air Strikes Against Islamic Jihad Despite Ceasefire
By Katherine Biek
By Katherine Biek
November 15, 2019
The military said it was retaliating after rockets were fired into Israel from Gaza on Thursday, despite a ceasefire that was in effect.
SHOW TRANSCRIPT

The military said it was retaliating after rockets were fired into Israel from Gaza on Thursday, despite a ceasefire that was in effect.

The two sides agreed to that ceasefire after two days of intense fighting. The clashes were sparked when an Israeli air raid in Gaza City killed a senior Islamic Jihad commander. Officials in Israel described Baha Abu Al-Ata as "a ticking bomb" who'd been preparing to launch more terror attacks against Israeli citizens.

Islamic Jihad responded with a barrage of rockets, which were mostly intercepted by Israel's defense system. Israel, in turn, responded with more airstrikes.

The cross-border violence resulted in the deaths of at least 34 Palestinians. More than 60 people in Israel were also injured.

Nickolay Mladenov, the U.N. Special Coordinator for the Middle East Peace Process, described the ceasefire as fragile on Thursday, tweeting, "The coming hours and days will be critical. All must show maximum restrain and do their part to prevent bloodshed. The #MiddleEast does not need more wars."