Israel-Palestine Report Aims To Fix What It Didn't In 2002 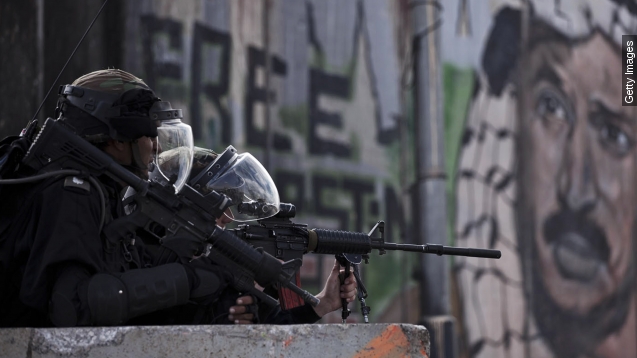 Israel and Palestine have been accusing each other of war crimes for almost 70 years — or, if you take a wider scope, several thousand years.

That makes Monday's report from the U.N. less than shocking. The organization accused both combatants of human rights violations in last summer's fighting, some of which could amount to war crimes. (Video via United Nations)

The report uses some strong language, but that doesn't mean it wields much power over how the two sides operate. The U.N. wrote a similarly condemning report almost 15 years ago for virtually the same thing — endangering civilian lives.

That document, released in August of 2002, was followed by a few years of slightly less volatile fighting, but the tactics remained the same. Rocket fire, hostage-taking, ethnic attacks and airstrikes in populated areas continued — all of which were cited in the earlier U.N. report. (Video via Israel Defense Forces)

These incidents served as sparks around the powder keg that exploded last summer, when fighting brutally escalated. The widespread killing of civilians, which was the motivation for the 2002 report, once again led to a stern report from the U.N. (Video via BBC)

The reports are similar in other ways, too, like the less-than-cooperative attitude of the Israeli government. But this time around, the U.N. wants the report to have more of an impact.

And they may have it in their explicit mention of war crimes. The 2002 report made vague references to the obligations of both sides to respect international law and human rights but didn't say anyone could be charged. (Video via The Daily Conversation)

Last summer's conflict ended in August, and the two sides have had relative peace since then — mostly broken by isolated attacks by Hamas.