Israel's Leadership In Doubt After Second Failure To Form A Government 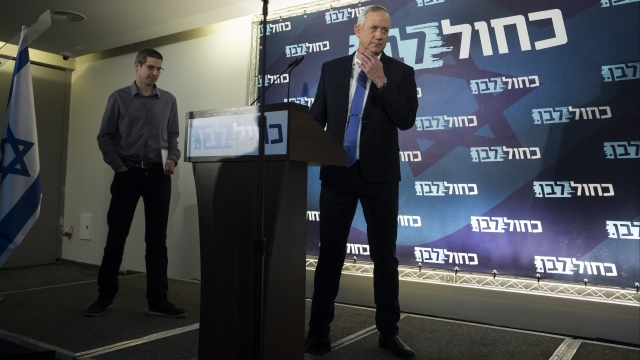 SMS
Israel's Leadership In Doubt After Second Failure To Form A Government
By Peter Hecht
By Peter Hecht
November 21, 2019
Benny Gantz's failure to form a governing coalition has triggered upheaval in Israel. A third election may be needed to select Israel's next leader.
SHOW TRANSCRIPT

The state of Israel is in a state of confusion over the future of its government. That's because former army chief Benny Gantz announced this week that he has failed to form a governing coalition to replace current Prime Minister Benjamin Netanyahu.

As a result, the next government and prime minister could be selected by Israel's parliament. Or the matter may go back to voters — again — for new elections, likely in March. That would mark Israel's third attempt to select its leader in less than a year.

This requires some explaining. Under Israel's parliamentary system, citizens vote for political parties, not individual candidates.

The leader whose party wins the most seats in the 120-seat parliament generally — but not always — becomes prime minister. It depends on their ability to assemble a ruling majority, out of Israel's more than 30 political parties.

Netanyahu has been Israel's prime minister since 2009 and from 1996 to 1999. But he failed to assemble a governing coalition after his right-wing Likud Party deadlocked with Gantz's centrist Blue and White Party in April elections, resulting in new elections in September.

On Wednesday, Gantz announced he had similarly failed. He said: "I left no stone unturned. I sifted through every grain of sand." But he fell short of the threshold of 61 supporters in parliament.

Daniel Shapiro, former U.S. ambassador to Israel, told the Washington Post: “Israel is caught in a cul-de-sac. There just seems to be no workable coalition among the parties.” Translation: The only thing that reigns over Israel is uncertainty.