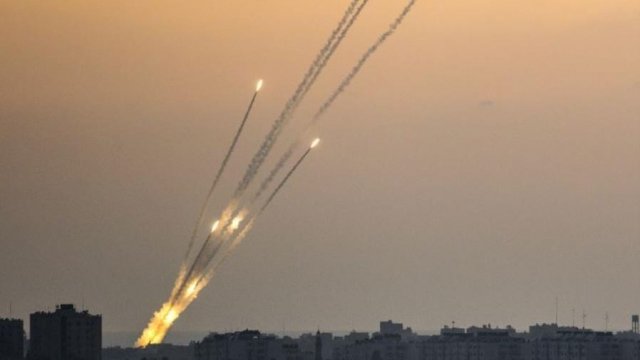 Israel's Prime Minister Benjamin Netanyahu said Sunday that reports of a cease-fire with Gaza militant groups are "incorrect." Two militant groups announced Saturday they had agreed to a truce with Israel.

During his weekly Cabinet meeting, Netanyahu said, "We are not prepared to accept any attacks against us and we will respond appropriately."

I heard it being said that Israel has agreed to a ceasefire that would allow the continuation of terrorism by incendiary kites and balloons; this is incorrect. We are not prepared to accept any attacks against us and we will respond appropriately.

The Israel Defense Forces said Sunday that it "will continue to operate with increasing force" against groups that carry out activities like launching arson balloons and kites.

This comes after the IDF said Saturday that its fighter jets launched the "largest wave of daytime strikes" in Gaza since 2014.

Palestinians along the Gaza border protested against Israel on Friday. It was part of the monthslong Great March of Return, which demands that Israelis leave the land they've controlled since the war in 1948. Two Palestinians reportedly died from Israeli live fire.

That led to an exchange of rocket and missile fire between Hamas — the militant political group that runs Gaza — and Israel. The IDF raids on Saturday reportedly killed another two Palestinians.

For more than a decade, Israel and Egypt have had Gaza under a blockade that's severely damaged the Gaza Strip's economy. More than 130 Palestinians have been killed in the Great Return protests since March.