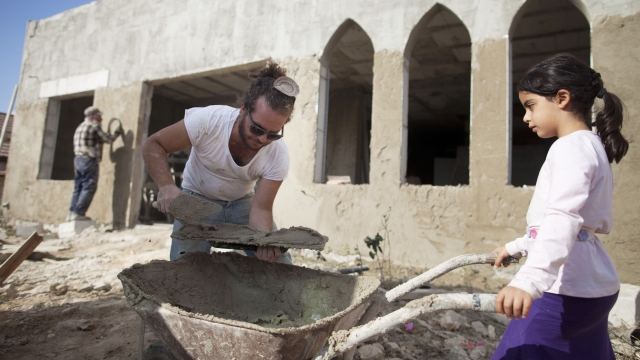 Barely a week ago, Israeli security forces were demolishing Palestinian apartment buildings in the West Bank. Now Israel has announced a building boom in the region.

Israel is giving the go-head on the construction of 6,000 new homes for its citizens in the West Bank. It says it will also approve 700 houses for Palestinians following protests over demolition of buildings Israel said were unauthorized. It's unclear if those 700 homes will be new constructions or existing ones getting permitted.

The announcement comes on the eve of a visit to Israel by President Trump's son-in-law, Jared Kushner. He's due to discuss a potential Israeli-Palestinian peace plan that the White House hopes to advance in formal negotiations.

But the construction plans, even with a limited number of homes for Palestinians, could complicate that.

The Palestinian Authority says new Israeli settlements in occupied territories violate international law and undermine a potential two-state solution, in which a recognized nation of Palestine would be formed in the West Bank, East Jerusalem and the Gaza Strip.

For its part, Israel says the new construction is appropriate and legal under domestic and international law. But in a statement, the Palestinian Authority called the new building plans "evidence of the dark colonial mentality of the rules in Israel."

Leading up to Kushner's visit, the Trump administration was hedging on Palestinian statehood. David Friedman, ambassador to Israel, said the U.S. was not "agreeing in advance to a state, because the word 'state' conjures up ... so many issues."

The West Bank and East Jerusalem include key territory that Palestinians are counting on for a potential future state. The new Israeli construction will add to existing settlements for 600,000 Israeli residents. They are neighbors to about 3 million Palestinians.