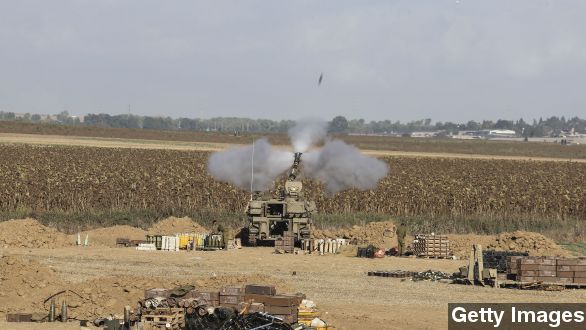 By Matt Picht
July 25, 2014
Israel and Hamas say they will abide by a 12-hour cease-fire Saturday morning, but efforts to find a long-term truce have reportedly stalled.
SHOW TRANSCRIPT

Eighteen days into the Gaza conflict, Israel and Hamas have both agreed to observe a twelve-hour humanitarian cease-fire.

Both sides of the conflict have agreed to stop fighting for twelve hours starting Saturday morning. The cease-fire is reportedly to honor the Muslim holiday of Eid, which marks the end of Ramadan. (Via Israel Defense Forces, The Jerusalem Post)

But a long-term truce remains elusive. Hours earlier, Israel's cabinet reportedly rejected a seven-day cease-fire plan put forward by U.S. Secretary of State John Kerry, who's in Cairo to mediate the hostilities. (Via The Guardian)

During a press conference, Kerry told reporters a final deal hasn't been proposed yet, but said he was confident in the basics of his plan.

"We still have some terminology in the context of the framework to work through. But we are confident we have a fundamental framework that can and ultimately will work." (Via MSNBC)

So far, the ongoing fighting between Israel and Hamas has killed 36 Israelis and over 850 Palestinians. The U.N. estimates a large percentage of the Palestinian dead are civilians. (Via Euronews)

The cease-fire comes one day after a U.N. school housing refugees from the conflict was attacked, killing 16 people. Israel and Hamas are both blaming each other for the strike, which has been widely condemned. (Via CBS)

And despite the cease-fire, things might soon get worse. Israel's Defense Ministry released a statement suggesting the military could soon broaden their ground operations in Gaza.