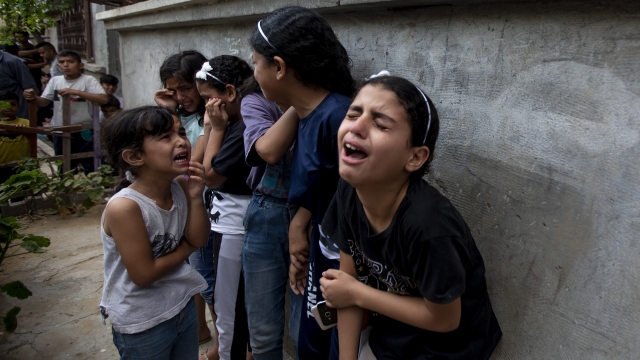 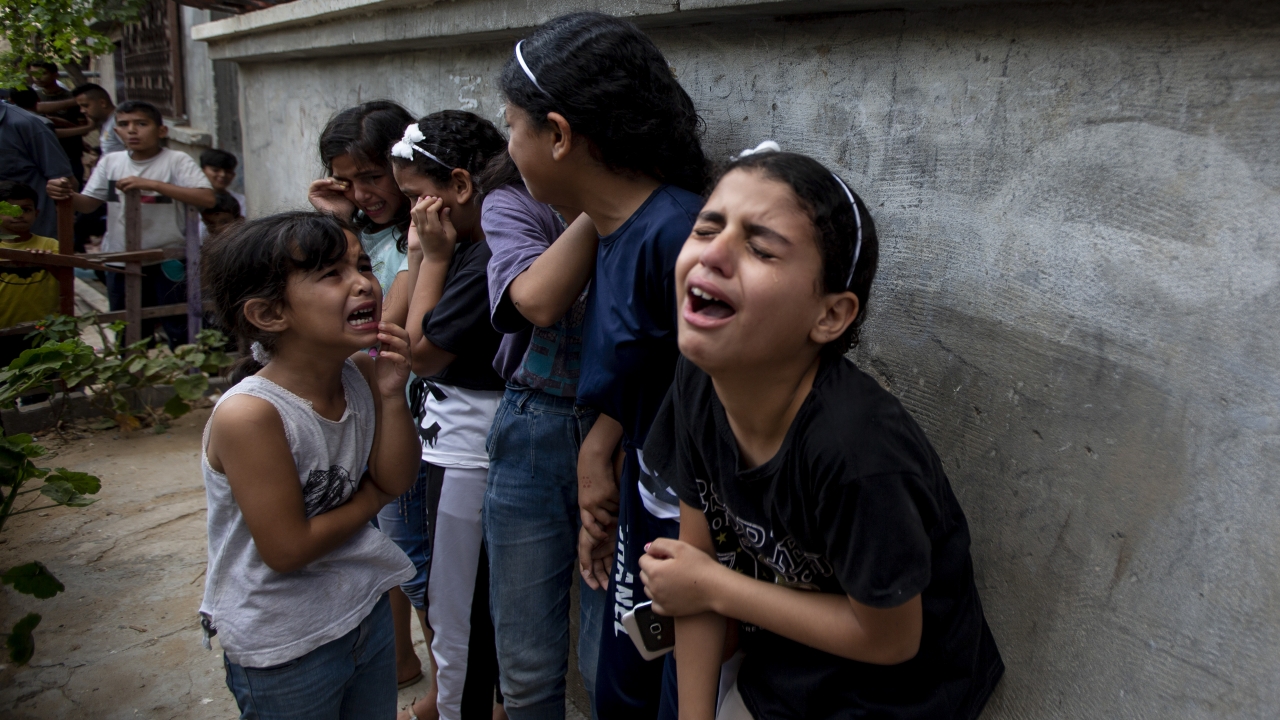 Israeli jets pounded militant targets in Gaza on Saturday and rocket barrages into southern Israel persisted, raising fears of an escalation after a wave of Israeli airstrikes on the coastal enclave killed at least 12 people, including a senior militant and a 5-year-old girl.

The fighting began with Israel's killing of a senior commander of the Palestinian Islamic Jihad in a strike Friday. Gaza's Hamas rulers so far appeared to stay on the sidelines of the conflict, keeping its intensity somewhat contained, for now. Israel and Hamas have fought four wars and several smaller battles over the last 15 years at a staggering cost to the territory's 2 million Palestinian residents.

Shortly before noon Saturday, Israeli warplanes stepped up airstrikes. After warning residents in phone calls, fighter jets dropped two bombs on the house of an Islamic Jihad member in a residential area of Gaza City, flattening the two-story structure and badly damaging surrounding homes. Women and children rushed out of the area, and there were no casualties.

"Warned us? They warned us with rockets and we fled without taking anything," said Huda Shamalakh, who lived next door. She said 15 people lived in the targeted home.

Another airstrike hit an Islamic Jihad site nearby. Gaza militants continued to launch rounds of rockets into southern Israel around every half hour, though there were no reports of casualties.

The lone power plant in Gaza ground to a halt at noon Saturday for lack of fuel as Israel has kept its crossing points into Gaza closed since Tuesday. The shutdown deepens the densely packed territory's chronic power crisis amid peak summer heat. With the new disruption, Gazans can get only 4 hours of electricity a day, increasing their reliance on private generators.

The latest round of Israel-Gaza violence was sparked by the arrest this week of a senior Islamic Jihad leader in the West Bank, part of a monthlong Israeli military operation in the territory. Citing a security threat, Israel then sealed roads around the Gaza Strip and on Friday killed Islamic Jihad's commander for northern Gaza, Taiseer al-Jabari, in a targeted strike.

An Israeli military spokesman said the strikes were in response to an "imminent threat" from two militant squads armed with anti-tank missiles.

"This government has a zero-tolerance policy for any attempted attacks — of any kind — from Gaza towards Israeli territory," Israeli Prime Minister Yair Lapid said in a televised speech Friday. "Israel will not sit idly by when there are those who are trying to harm its civilians."

"Israel isn't interested in a broader conflict in Gaza but will not shy away from one either." he added.

The violence poses an early test for Lapid, who assumed the role of caretaker prime minister ahead of elections in November, when he hopes to keep the position.

Lapid, a centrist former TV host and author, has experience in diplomacy having served as foreign minister in the outgoing government, but has thin security credentials. A conflict with Gaza could burnish his standing and give him a boost as he faces off against former Prime Minister Benjamin Netanyahu, a security hawk who led the country during three of its four wars with Hamas.

Hamas also faces a dilemma in deciding whether to join a new battle barely a year after the last war caused widespread devastation. There has been almost no reconstruction since then, and the isolated coastal territory is mired in poverty, with unemployment hovering around 50%.

Egypt intensified efforts to prevent escalation, communicating with Israel, the Palestinians and the U.S. to keep Hamas from joining the fighting, an Egyptian intelligence official said. The official spoke on condition of anonymity because he was not authorized to brief media.

The Palestinian Health Ministry said a 5-year-old girl and a 23-year-old woman were among 12 killed in Gaza, along with more than 80 wounded. It did not differentiate between civilians and militants. The Israeli military said early estimates were that around 15 fighters were killed.

Hundreds marched in a funeral procession for the Jihad commander al-Jabari and others who were killed, with many mourners waving Palestinian and Islamic Jihad flags and calling for revenge. Al-Jabari had succeeded another militant killed in an airstrike in 2019, which at the time also set off a round of heavy fighting.

Overnight, Israeli media showed the skies above southern and central Israel lighting up with rockets and interceptors from Israel's Iron Dome missile-defense system. There were no immediate reports of casualties on the Israeli side. Israel said its overnight strikes in Gaza hit rocket launchers, rocket building sites and Islamic Jihad positions. It also arrested 19 Islamic Jihad militants in the West Bank, the military said.

The U.N. special envoy to the region, Tor Wennesland, said: "The launching of rockets must cease immediately, and I call on all sides to avoid further escalation."

Defense Minister Benny Gantz approved an order to call up 25,000 reserve soldiers if needed while the military announced a "special situation" on the home front, with schools closed and limits placed on activities in communities within 50 miles of the border.

Israel closed roads around Gaza earlier this week and sent reinforcements to the border as it braced for a revenge attack after Monday's arrest of Bassam al-Saadi, an Islamic Jihad leader, in a military raid in the occupied West Bank. A teenage member of the group was killed in a gunbattle between Israeli troops and Palestinian militants.

Hamas seized power in Gaza from rival Palestinian forces in 2007, two years after Israel withdrew from the coastal strip. Its most recent war with Israel was in May 2021. Tensions soared again earlier this year following a wave of attacks inside Israel, near-daily military operations in the West Bank and tensions at a flashpoint Jerusalem holy site.

Iran-backed Islamic Jihad is smaller than Hamas but largely shares its ideology. Both groups oppose Israel's existence and have carried out scores of deadly attacks over the years, including the firing of rockets into Israel. It's unclear how much control Hamas has over Islamic Jihad, and Israel holds Hamas responsible for all attacks emanating from Gaza.

Israel and Egypt have maintained a tight blockade over the territory since the Hamas takeover. Israel says the closure is needed to prevent Hamas from building up its military capabilities. Critics say the policy amounts to collective punishment.