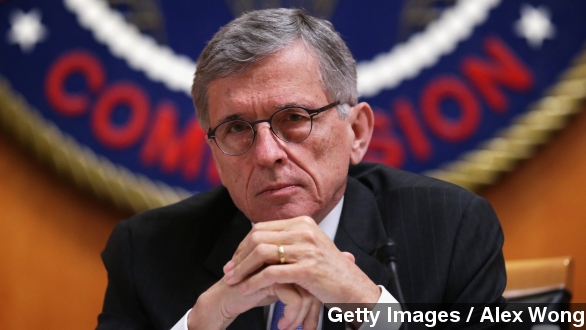 SMS
ISPs Angry After FCC Raises Requirement For Broadband Speed
By Ben Lawson
By Ben Lawson
January 29, 2015
In a move to increase competition, the Federal Communications Commission upped the speed necessary for an Internet service to be considered broadband.
SHOW TRANSCRIPT

In a move meant to push a notoriously noncompetitive industry forward, the FCC has changed the definition of broadband to meet a higher standard.

Now, this doesn't necessarily mean your Internet speeds are going to jump dramatically. It just means Internet service providers can't call a service "broadband" unless it meets those standards.

The idea is that by not labeling certain services as broadband, customers will avoid that service because of slower speeds, which would motivate ISPs to increase their speeds to remain competitive. (Video via Comcast)

The FCC says 80 percent of Americans already have access to these faster speeds, and this move is meant to address the 20 percent who don't.

FCC Commissioner Mignon Clyburn explained: "We are never satisfied with the status quo. We want better. ... As consumers adopt and demand more from their platforms and devices, the need for broadband will increase, requiring robust networks to be in place in order to keep up."

When it comes to Internet speeds, the U.S. is behind some other countries. Internet analyst Ookla ranks the U.S. 26th in overall download speeds. If you're wondering, Singapore is No. 1 with more than three times the average speed than America.

But not everyone is on board with these FCC changes. The cable industry's largest lobby group, the National Cable & Telecommunications Association, says it opposes the new standards.

In a letter to the FCC, it called the new regulations "entirely out of step" with what customers need. In a blog post following the decision, it even accused the FCC of "letting the prospect of new regulatory power cloud its objective assessment of how Americans generally use broadband today."

This new definition of broadband also has the potential to shake up the pending Comcast-Time Warner Cable merger, since Comcast now has far fewer competitors under the new standards.