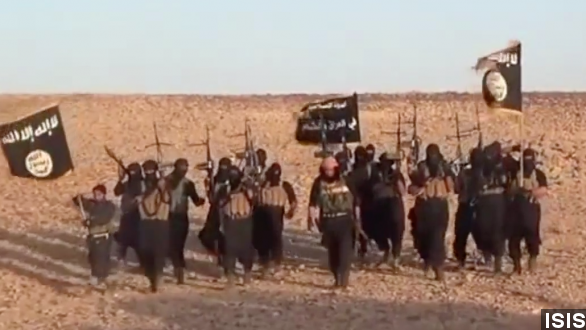 ISIS claims to have executed the Jordanian pilot at the center of its prisoner swap offer, burning him alive in a new video.

ISIS took Moaz Al-Kassasbeh hostage in December when the 27-year-old lieutenant's jet crashed near the Syrian city of Raqqa.

His aircraft was conducting airstrikes on ISIS positions as part of the U.S.-led coalition fighting the group. (Video via U.S. Central Command)

A video released by the militants Tuesday showed a man dressed in an orange jumpsuit, standing in a cage engulfed in flames. The identity of the man in the video hasn’t been confirmed but is believed to be Al-Kassasbeh.

The video, if confirmed, marks the first time ISIS has burned alive such a high-profile hostage. Before now, they’d all been beheaded or shot.

Al-Kassasbeh’s fate was tied to this woman — Sajida al-Rishawi  — an Iraqi woman on death row for her role in the deadly 2005 Amman hotel bombings, orchestrated by Al-Qaeda. ISIS had threatened to kill al-Kassasbeh if Jordan didn’t hand her over. (Video via MSNBC, Sky News)

Jordan had said it was willing to go along with the prisoner exchange if ISIS offered proof the pilot was still alive, which it apparently never did.

Citing unnamed Jordanian officials, Sky News Arabia is now reporting Jordan will move forward with the execution of al-Rishawi, along with five other convicted terrorists.

The terrorists had threatened to kill him if Jordan did not hand over an Iraqi would-be female suicide bomber, Sajida al-Rishawi. Jordan hasn't released her.

The latest ISIS video comes days after the beheading of Kenji Goto, the second of of two Japanese hostages executed by ISIS. (Video via YouTube / Haruna Yukawa)