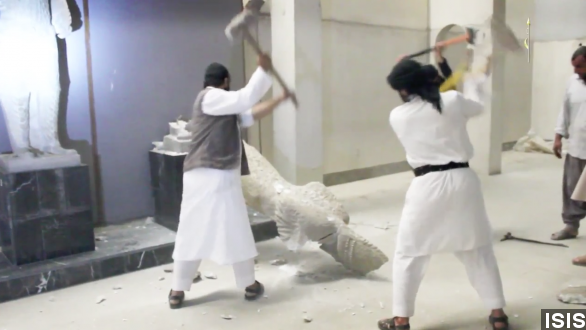 This video showing ISIS destroying artifacts at a museum in Northern Iraq, along with reports that the group burned thousands of books this week, sparked outrage from the international community.

"We've seen not just the brutality of ISIL; we've seen the horrific acts that they have undertaken around the world, the disrespect for historic sites," Jen Psaki said.

"ISIS is really out to try to remove from any type of history that doesn't fit with their very limited and narrow view of Islamic history," Fox News reported.

"To see these pieces being smashed like that is really heartbreaking," Archaeologist Michael Danti said.

The museum in Mosul is Iraq's second largest museum. One of the worst offenses in the video was this part showing a man destroying this winged bull statue, which dates back to the 9th century B.C.

But this is definitely not ISIS's first attack on pieces it sees as "idolatry," and Iraq has been a dangerous place for cultural artifacts since before ISIS.

Just as ISIS has been on a religiously motivated rampage against other religious and ethnic groups in the region, the group has also been on a rampage against history and culture — demolishing anything it believes goes against its narrow view of Islam.

Soon after ISIS first took control of the city of Mosul, which is located in Nineveh province, it destroyed an ancient holy site. It was known as the burial place of the prophet who is called Jonah in the Bible — the same Jonah who was swallowed by a large fish or a whale. He's an important figure in Christianity, Judaism and Islam.

The group also reportedly destroyed multiple historical sites in Tikrit, including a 7th century Christian site known as the Green Church in Tikrit.

And ISIS doesn't just destroy artifacts. These items are safe in other museums, but reliefs and cuneiform objects like these have also been stolen to sell on the black market.

"Some of those relics are thousands of years old and have really high value and selling them abroad to private collections thus funding their terrorist activities," RT reports.

Some estimates say this could be as much as the second largest funding source for ISIS — officials are saying ISIS may have kept some of the artifacts from the museum in Mosul to sell.

Now there are fears that ISIS will destroy other archaeologically significant sites. Two UNESCO sites are listed as at risk in Iraq, and ISIS has many other important archaeological sites under its control.

Luckily, a majority of the artifacts we see being destroyed in this video were actually plaster copies of the real deals, which are in the Iraq Museum in Baghdad and in others around the world.

That Museum in Baghdad just reopened Saturday. It closed in the aftermath of the U.S. invasion into Iraq in 2003. At the time Al-Qaeda and other looters stole an estimated 15,000 items, so ISIS really isn't playing a new game here.

About two thirds of those stolen items from the Iraq Museum are still missing — including this famous 8th century B.C. piece called Lioness Attacking a Nubian.

There has been some effort to protect Iraq's culture from pilfering. The U.S. State Department has published a Red List of Iraqi Cultural Objects at Risk so that customs officials will know what to look for when trying to stop the illegal movement of artifacts.

And UNESCO has called for an emergency meeting of the U.N. Security Council to discuss the protection of cultural heritage in Iraq.