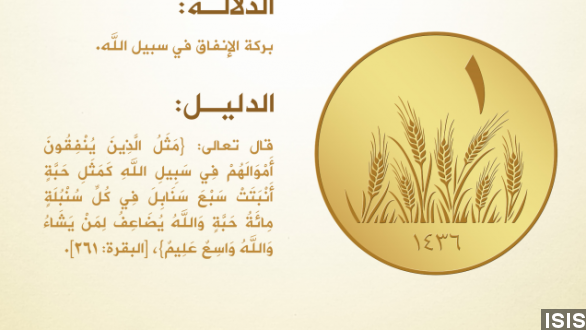 SMS
ISIS Minting Money To Escape 'Satanic' Economy
By Jake Godin
By Jake Godin
November 14, 2014
ISIS, determined to combat all things Western, has announced it will be removing itself from the global economy by minting its own currency.
SHOW TRANSCRIPT

We’ve heard the line “money is the root of all evil” before and it seems ISIS has, too. Their solution? Minting their own, not-so-evil currency.

The eight-page statement shows off what this supposed ISIS currency would look like. Symbols such as the holy Al-Aqsa mosque in Jerusalem and the Islamic crescent moon are emblazoned on the backs with Arabic phrases on the fronts.

The money will apparently be based off the historical gold dinar. Many Islamic countries such as Iraq, Jordan, Libya and Tunisia use modern, paper dinars as their currency.

The most expensive ISIS coin will be worth five gold dinars, or somewhere in the ballpark of $700. Cheaper coins will range from valuations at 7 cents for the cheapest copper coin to about $4.50 for the most expensive silver coin.

While ISIS reportedly makes millions from selling its captured oil reserves on the black market, extortion and kidnappings, the decision to mint its own currency seems to be an attempt to break away from relying on the international economy.

According to CNN, ISIS reasons that by minting currency “purely dedicated to God,” the organization can remove Muslims from the “global economic system that is based on satanic usury.” (Video via YouTube / ولاية الرقة)

But the Financial Times says the decision to mint coins out of precious metals like gold and silver could actually have the reverse effect, making ISIS more dependent on the international market as the metals sway in prices. (Video via The Perth Mint)

And a former U.S. Treasury undersecretary told CNN ISIS may be putting the cart before the horse on trying to create its own financial system.

JIMMY GURULE VIA CNN: “You can't just put that money in shoe boxes and place it under your mattress. It has to enter into the financial system at some point in time. So I think the Treasury needs to be focusing on banks — banks in Qatar for example...”

But a writer for Vox says even operating a bank would be difficult for the self-declared Caliphate because it's so volatile. (Video via YouTube / Foukoul Hani Rif)

“Nobody would want to hold ISIS fiat money over the long-term, so it would be impossible to profitably operate a bank using ISIS money, or for ISIS money to serve as a useful medium of exchange.”

So far, ISIS has revealed no other details surrounding the concept currency such as when or where it would be available.