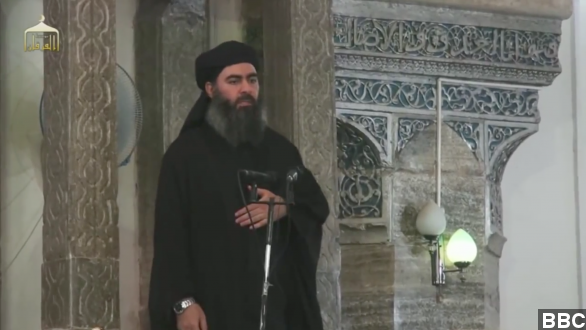 The numerous reports that ISIS leader Abu Bakr al-Baghdadi had been gravely wounded or even killed in airstrikes last weekend appear to have been greatly exaggerated.

The militant group released an audio recording Thursday of what they claim is Baghdadi giving a fiery 17-minute speech that makes reference to recent events.

The recording, which mocks the anti-ISIS coalition efforts and encourages ISIS followers to "erupt volcanoes of jihad everywhere," mentions an Egyptian militant group pledging allegiance to ISIS Monday, after the strikes that would have killed Baghdadi took place.

The message comes after U.S.-led airstrikes targeted ISIS leadership near Mosul on Nov. 9. Iraqi military sources claimed the strikes hit Baghdadi, though U.S. officials have shied away from confirming that claim.

JEN PSAKI VIA U.S. DEPARTMENT OF STATE: "We cannot confirm if ISIL leader Baghdadi was present; we have no further information to provide regarding those strikes at this point."

The recording isn't just a proof of life for Baghdadi, though — one analyst told NBC the group is "focusing on momentum that they have recently gained in areas outside of [Syria]. ... As of today, there are at least 30 separate regions that have active militant organizations that have pledged support to Islamic State, a total of 60 distinct groups world wide [sic]."

Another victory for ISIS on that front — the Associated Press reported Thursday Al-Qaeda's Syria affiliate the Nusra Front has also signed a pact with ISIS.