ISIS Is Recruiting More Child Soldiers, And It Wants You To Know 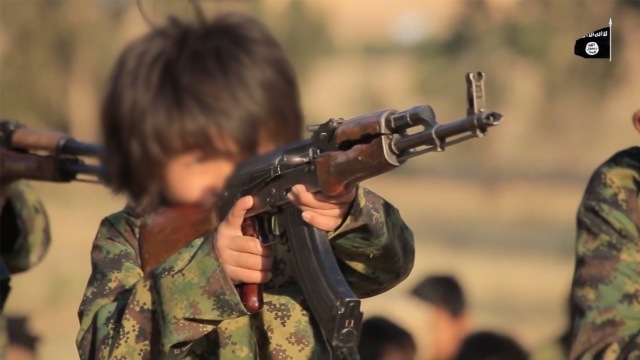 SMS
ISIS Is Recruiting More Child Soldiers, And It Wants You To Know
By Ryan Biek
By Ryan Biek
May 16, 2016
Children are shown reciting the Quran, wrestling and shooting guns.
SHOW TRANSCRIPT

Boys from Indonesia, Malaysia and the Philippines are shown reciting the Quran, wrestling and shooting guns.

The boys burn their passports at the end of the video. One fighter has been translated as saying: "We renounce your so-called citizenship. We are coming to you with soldiers you will never be able to defeat. This is a promise from Allah."

West Point's Combating Terrorism Center argues ISIS has been recruiting child soldiers at a rate rarely seen even among other extremist groups like the Taliban and Hezbollah.

These videos of camps have a purpose of their own, though. Some have argued it's not just the children in the videos who are learning the jihadist philosophy of Islam — the videos also effectively recruit children and adults watching online.

Judging by the latest video, ISIS is trying to spread outside the Middle East to other countries with high Muslim populations. Indonesia, in particular, has the largest Muslim population in the world.

This video includes clips from ISIS and music provided courtesy of APM Music.