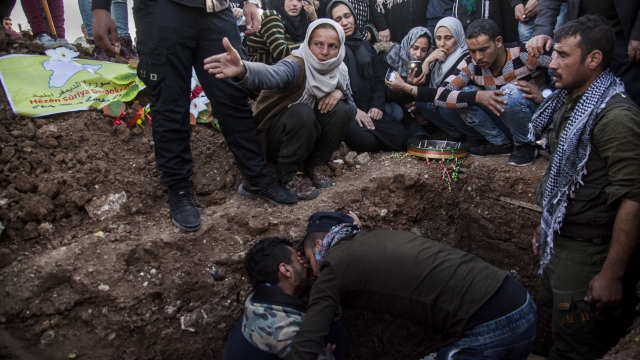 SMS
ISIS Makes A Comeback During The Coronavirus Pandemic
By Sasha Ingber
By Sasha Ingber
May 28, 2020
The terrorist organization has ramped up attacks while also taking advantage of changes caused by the coronavirus pandemic.
SHOW TRANSCRIPT

Once seen as a defeated foe, ISIS is steadily recovering — and benefiting from the pandemic.

"They still can't hold terrain. But we're watching them actually set the conditions for those kinds of more aggressive military operations," says Jennifer Cafarella, a national security fellow at the Institute for the Study of War. "Worst case scenario is we go back to ISIS having physical control over major populations again. I don't think that's far from possible."

In recent days, ISIS fighters have ambushed Iraqi and Syrian security forces and a suicide bomber self-detonated outside an intelligence headquarters in the oil-rich Iraqi city of Kirkuk. Returning to their insurgent roots, they have also been able to simultaneously attack a single target from multiple locations.

In an Iraq left reeling from mass protests, ISIS has found refuge in disputed territories — rural areas where neither the Iraqi security forces nor the north’s Kurdish military forces, called the Peshmerga, have control. A joint security mechanism has stalled, and Iran’s proxy militias run rampant.

"Maybe in Baghdad, there is a concern that because these are disputed territories, they don't want the Peshmerga to have a place there. But that begs the question: Do you prefer to have ISIS there?" Bayan Sami Abdul Rahman, Kurdistan Regional Government Representative to the U.S., tells Newsy.

In Syria, ISIS has been mounting attacks on the eastern bank of the Euphrates River Valley — an area the Syrian Democratic Forces have struggled to protect after the U.S. pulled back troops last year and Turkish forces flowed over the border.

"Unfortunately, we still have a situation where the SDF cannot, for example, secure all of the prisons in which thousands and thousands of ISIS members are detained. And there's one prison in Hasakah city where there has been three riots within the past 90 days," Cafarella says.

ISIS has also benefited from the pandemic, with fighters already living apart from society and socially distanced in small, scattered groups. Another boon: the coalition’s precautions to protect U.S. personnel.

"For example, now the training stopped. There is no training for the Peshmerga and the Iraqi security forces in the training centers. There is no normal meetings and cooperation as used to be," Brig. Gen. Hajar Ismail, Director of Coordination and Relations, Iraqi Kurdistan’s Ministry of Peshmerga, tells Newsy. "The coalition forces, they left some bases in Iraq. So ISIS exists in those areas."

A different danger continues to go unaddressed: a potential fighting force among ISIS children, who are getting older in Syrian refugee camp al-Hol.

"This generation is not just a lost generation in terms of lack of education and so on, but they are already being radicalized. So by the time they're teenagers or full grown adults, they will be frankly ticking time bombs," says Rahman.

As ISIS gathers strength, some say the U.S.-led coalition needs to do more, from increasing airstrikes to exerting more pressure in Baghdad for cooperation.

"We are thankful for the coalition. They provided some support to the Peshmerga, but honestly it was not enough. We need a budget. We need payments, we need salaries. We need weapons and ammunition," says Ismail.

"The coalition continues to provide all the support we can," Caggins says. "And although they cannot hold any physical territory and although we have significantly disrupted, degraded and destroyed their ability to promote themselves, recruit, send propaganda — their ideology exists."