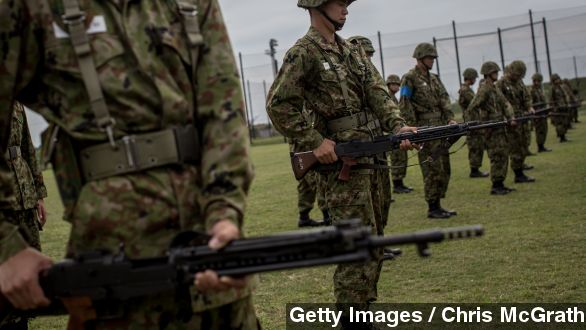 Prime Minister Shinzo Abe says Japan “will not give in to terrorism.” (Video via Public Relations Office, Cabinet Office, Government of Japan)

But what does that mean exactly for a country with limited military options? (Video via Japan Ground Self-Defense Force)

Since its defeat in World War II, Japan has barred its troops from fighting abroad under its pacifist constitution — limiting the military’s job strictly to self-defense. (Video via U.S. National Archives)

“The Japanese people forever renounce war as a sovereign right of the nation and the threat or use of force as means of settling international disputes.” (Video via Japan Ground Self-Defense Force)

Today, Japan is part of the U.S.-led coalition fighting ISIS, but it hasn’t been participating in the airstrikes. Instead, the country’s role has been confined to giving humanitarian aid. (Video via U.S. Central Command)

“The entire world is appalled by the brutal murder of Jim Foley,” President Obama said.

Each time ISIS has killed British and American hostages, the beheadings have helped galvanize public support for action. (Video via The White House)

The opposite could happen in Japan. Polling shows the public is already split on whether to increase Japan's military presence on the world stage.  (Video via Japan Air Self-Defense Force)

As a research fellow at PHP Institute in Tokyo explained to The Wall Street Journal: "The crisis illustrated that when it comes to Islamic State, Japan can be a target no matter whether its involvement is military or nonmilitary. ... That could mean the public could think it’s simply better to stay clear of such affairs."

The current ISIS hostage crisis comes as Abe is pushing to re-militarize the nation.

This summer, his cabinet approved what it called a "reinterpretation" of the country’s constitution, giving Japan the right to "collective self-defense." In other words, the military can now help allies under attack.(Video via Japan Ministry of Defense)

This video includes music from jobro.