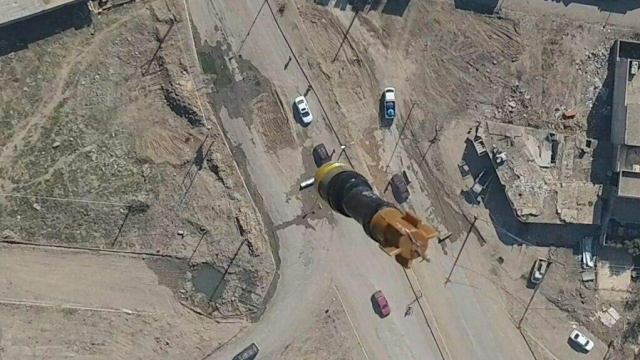 SMS
ISIS Drones And The 'Industrial Revolution Of Terrorism'
By Jake Godin
By Jake Godin
June 2, 2017
Drones are only one part of ISIS' extensive arsenal of do-it-yourself weaponry that includes rocket launchers and rifle grenades.
SHOW TRANSCRIPT

ISIS has an air force, and it's made up of consumer drones. Video from AlMawsleya TV in Mosul shows an ISIS drone that Iraqi Security Services downed. ISIS has used drones since 2014. Initially, they were for surveillance and making propaganda videos. They were also used to direct mortar or rocket attacks.

Eventually, ISIS started using drones as a sort of do-it-yourself air force. They became especially prominent in Mosul, Iraq, as ISIS lost more and more of the city. When they weren't dropping homemade explosives from the drones, they used them to direct suicide bombers to targets in the urban terrain. 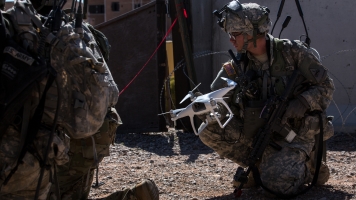 "For tactical reasons, because it's easier, you don't have to account for inertia too much for this kind of platform when you drop an ordinance," he says. "But also because it's commercial and off the shelf, so it's easier to obtain. You know, ISIS had a program in place since 2015. From those documents, you could see that there were different purposes for drones, like bombing, spying, training — things like this, so, they used them in forms to their advantage."

Drones are only one part of a larger set of homebrew ISIS weaponry. Among other things, the group makes its own rocket launchers, rifle grenades, improvised explosive devices, or IEDs. While making explosives is nothing new for terror groups, the scale that ISIS does it, is.

"It really resembled to me, an industrial revolution of terrorism so to speak, you know?" Spleeters says. "For us, there are two factors that are really at the basis for why the Islamic State group is having a very strong military production program. The first reason is they like to develop their own brand. They are a state, and they are self-sufficient. ... It's their politics, it's their ideology. And the second reason is to supplement their current arsenal with things that they might be lacking."

Despite that ISIS continues to lose territory, including some of it's largest urban areas, Spleeters says ISIS is still alive and kicking in terms of innovation. And that it may even spread outside of Iraq and Syria.

"As long as their chain of supply remains in place, it will survive," he says. "If not, it will stay dormant until there is material to use."

Conflict Armament Research has written a host of reports on ISIS weapons in Iraq and Syria. Damien Spleeters and his team have conducted more than 30 missions in the region over more than 500 days and have documented more than 40,000 items. See CAR's work here.

More useful information on ISIS weapon innovation, specifically on drones, can be found in this report from West Point's Combating Terrorism Center. Bellingcat, an open-source journalism collective, gathered visual evidence of more than 100 drone attacks in Iraq and Syria and analyzed them by munition type and target here.