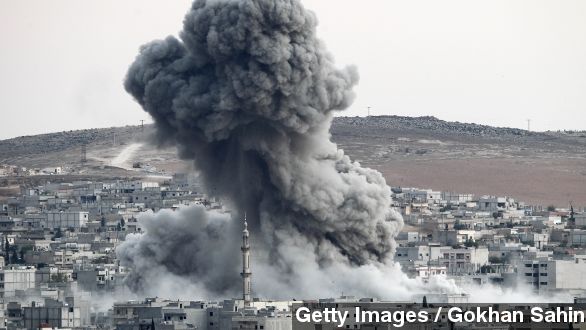 Despite more than 60 nations signing on to the American-led anti-ISIS coalition, the U.S. is dominating the air campaign against the militants.

“The strength of this coalition makes it clear to the world that this is not America's fight alone," President Obama said. (Video via The White House)

The American-led coalition fighting ISIS boasts more than 60 members — members whose only qualification is that they commit to “exposing ISIL’s true nature.”

Their involvement ranges from donating humanitarian aid to providing weapons and equipment to simply expressing their support. (Video via CBS)

And that’s left the U.S. doing most of the work, though the Pentagon would probably disagree with that characterization.

“... the idea that this is the United States’ war. It’s not. And I think a coalition of 60 nations proves that it’s not,”  Pentagon spokesperson Rear Admiral John Kirby said.

Of those 60-plus nations, the Obama administration has pressed for the Arab states involved to play an active role.

But their contributions, especially to the air campaign, have been limited. As of last week, the Pentagon reported U.S. forces had conducted 92 percent of the airstrikes in Syria and 72 percent of those in Iraq.

Of course that was before Jordan ramped up its involvement in retaliation for the brutal ISIS killing of Jordanian pilot Muath al-Kasasbeh. (Video via YouTube / Piner Cevis)

For the past three days, the country has relentlessly pounded ISIS targets in northern Syria, but Jordan's small air force probably won't keep up that pace. (Video via Jordan Armed Forces)

And so far, we haven’t gotten any real indication Jordan, or any other country for that matter, is willing to commit ground troops. (Video via Jordan Armed Forces)

One country that could make a real difference is Turkey, which has been reluctant to get heavily involved. It's providing humanitarian aid to the coalition, but the U.S. is pushing to use a strategically-located airbase to target ISIS.