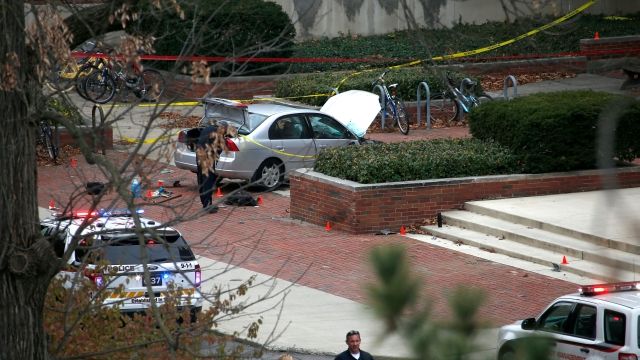 SMS
ISIS Calls Ohio State Attacker A 'Soldier Of The Islamic State'
By Lauren Stephenson
By Lauren Stephenson
November 29, 2016
It's not uncommon for ISIS to try to claim responsibility for an attack — even if the suspect isn't actually connected to the group.
SHOW TRANSCRIPT

ISIS has reportedly claimed responsibility for the attack at Ohio State University on Monday morning.

It has used similar language to describe suspects in various recent attacks like those in Nice, France; Orlando, Florida; and Minnesota.

The OSU student allegedly crashed his car into a crowd and stabbed several people with a knife before a police officer shot and killed him.

According to NBC News, a post published on the attacker's Facebook page shortly before the incident called the dead Al-Qaeda cleric Anwar al-Awlaki a "hero."

It's not uncommon for ISIS to try to claim responsibility for an attack even if the perpetrator doesn't have a direct connection to the group.

However, unnamed law enforcement sources told various outlets, including CNN, that the attacker was likely inspired by ISIS.

As of Tuesday afternoon, some of the 11 people injured had already been released from the hospital. All are expected to survive. Meanwhile, students returned to class Tuesday.