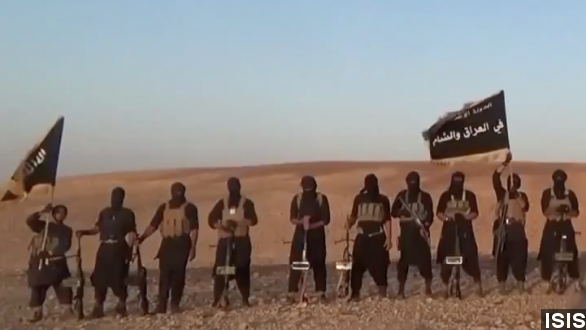 ISIS is offering these photos as proof American hostage Kayla Mueller died when the Syrian town of Raqqa was bombed by Jordanian planes. Here’s why you should be skeptical.

Not the least of which is, ISIS is a terrorist group with every reason to lie and manipulate. But more importantly, if you think about the circumstances surrounding Mueller’s alleged death, it doesn't quite add up.

Two key points to consider: ISIS says no jihadists were killed, only Mueller. And Jordan says its airstrikes targeted only ISIS weapons depots. Assuming both are true, why would Mueller have been held in a weapons depot … alone? (Video via Royal Jordanian Air Force)

Also, you'd think there would have been smoke rising from this building that'd just been bombed.

And remember, ISIS has lied about its hostages before. It’s believed ISIS killed the Jordanian pilot a full month before it released a video of him being burned alive.

Finally, ISIS hasn't shown a body or produced any real evidence pointing to Mueller's death. Which is unusual — in the past  ISIS hasn't hesitated to flaunt videos and photos of their Western hostages.

As many experts have pointed out, it's entirely possible Mueller did die, just not in the way ISIS has described. Perhaps in a way that didn't make for a good video. When the Jordanian airstrikes came along, they presented ISIS with the perfect propaganda opportunity.

Mueller’s parents are holding out hope she’s still alive. In a statement released to NBC, they addressed the militants, saying, “You told us that you treated Kayla as your guest, as your guest her safety and well-being remains your responsibility.”

Before she was taken captive in August 2013, Mueller had been doing aid work in Syria.

“I am in solidarity with the Syrian people.” (Video via YouTube / kaylakanh)

If Mueller’s death is confirmed, she’d be the fourth American to die in ISIS captivity.