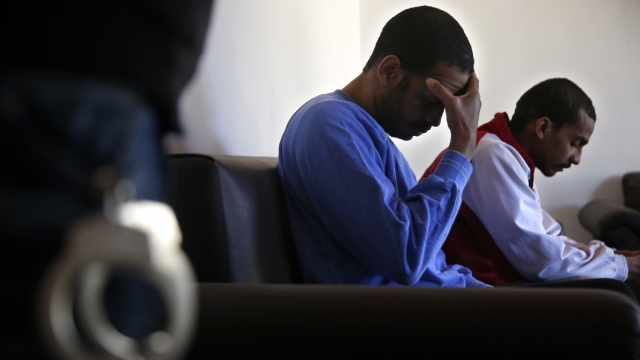 SMS
Charges Against ISIS Beatles 'A Long Time Coming' Says Victim's Mother
By Sasha Ingber
By Sasha Ingber
October 8, 2020
Jihadists Alexanda Kotey and El Shafee Elsheikh were captured trying to flee Syria in 2018 and extradited to the U.S. by the U.K.
SHOW TRANSCRIPT

"I'm deeply grateful. Feels miraculous in many ways. It's been a long time coming," Diane Foley, founder and president of the James W. Foley Legacy Foundation and the mother of slain journalist James Foley, told Newsy.

Alexanda Kotey, 36, and El Shafee Elsheikh, 32, arrived from the UK on Wednesday.

"Today is a good day, but it is also a solemn one. Today, we remember four innocent Americans whose lives were taken by ISIS," said Assistant Attorney General for National Security John Demers.

Kotey and Elsheikh were charged in connection with the kidnappings and murders of journalists James Foley and Steven Sotloff, and aid workers Peter Kassig and Kayla Mueller. The suspects were part of the infamous “Beatles,” a nickname prisoners gave them for their English accents.

"What makes this so different is the incredible brutality that these particular people are accused of carrying out, the fact that they were Westerners from the United Kingdom -- and that they're being tried here as opposed to, say, in Syria or Iraq or even in the U.K.," says Matthew Levitt, director of the Jeanette and Eli Reinhard Program on Counterterrorism and Intelligence at The Washington Institute for Near East Policy.

They were captured trying to flee Syria in 2018, and extradited from the UK after Attorney General Bill Barr promised the U.S. wouldn’t seek death penalties.

"These two men have been held nearly 20 months, which is the same length of time they held, starved and tortured our son, Jim. So the similarities are length of time, but otherwise these men have been fed, clothed, housed, given access to legal counsel," says Foley. "And now we're going to have an opportunity to have a defense attorney and have what is the best we can approach as a fair trial."

Prosecutions of ISIS jihadists can be slow and complicated.

"It can take a while to collect the evidence and to negotiate with a country where these people are held at the time. It all depends on the level of evidence you have been collecting, and that is a real task," says Simon Minks, a senior public prosecutor in international crimes to the Netherlands Court of Appeal.

Victims who were kidnapped are expected to testify at the trial in Alexandria, Virginia. Other evidence could range from notorious beheading videos to materials seized from raids in Syria to communications the suspects had with contacts back in the UK.

"There's so much evidence that can be brought to bear even from kind of open source information that it's going to be an uphill battle for them," says Levitt.

They face a maximum sentence of life in prison. Families of victims hope the trial reveals not just information on other jihadists at large, but locations of the remains of their lost loved ones.

"I really feel in the end, it's merciful for them, if they truly inflicted all of this horror, that they have time to know and to change their own hearts," says Foley.