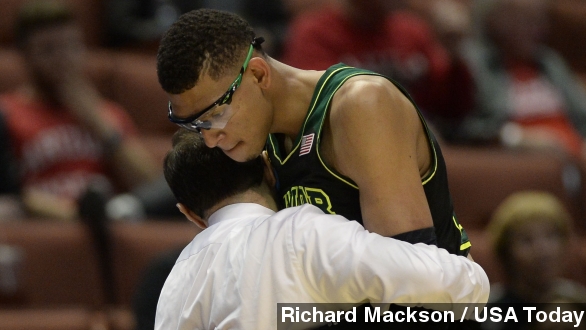 By Matt Moreno
June 22, 2014
NBA hopeful Isaiah Austin, who is blind in his right eye, was diagnosed with Marfan Syndrome and won't be able to play competitive basketball.
SHOW TRANSCRIPT

What was set to be an inspiring road-to-the-NBA story about former-Baylor center Isaiah Austin overcoming adversity has now been crushed.

Baylor University announced Sunday the potential first-round pick was diagnosed with Marfan Syndrome — a genetic condition that affects the body's connective tissue and causes aortic enlargement, which is life threatening. He spoke with ESPN:

"If I overwork myself or push too hard ... my heart could rupture. ... The draft is four days away and I had a dream that my name was going to be called." ​(Via ESPN)

Baylor coach Scott Brooks said, "This is devastating news, but Isaiah has the best support system anyone could ask for, and he knows that all of Baylor Nation is behind him. His health is the most important thing. ... Our hope is that he'll return to Baylor to complete his degree and serve as a coach in our program."

Austin responded to the heartbreaking news on Twitter by staying positive with a series of tweets, one reading, "I would love to thank EVERYONE who has reached out to me. Toughest days of my life. But not the last! Life goes on. GOD IS STILL GREAT!"​ (Via Twitter / @IsaiahAustin)

The 7-foot-1 center already faced adversity on the path to college stardom. Austin was blinded in his right eye after a childhood accident tore his retina.

Austin ended up committing to Baylor where he became one of the most elite shot blockers in the nation. Speaking with reporters just days before he found out about his condition, he had this to say: (Via YouTube / DraftExpress)

"If I get drafted anywhere it's going to mean the world to me. Because I'm not even supposed to be in this position in the first place. I'm not supposed to have made it this far so I'm just thankful." (Via WBZ-TV)

Austin's diagnosis comes just four days before the NBA Draft, which begins Thursday. There's no word yet on if Austin will return to school.