Is US Women's Offense In Trouble Going Into The World Cup? 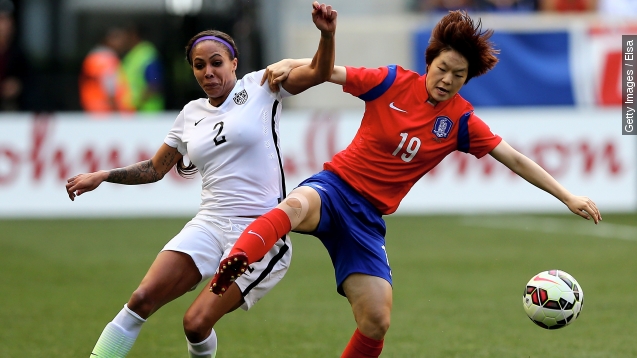 SMS
Is US Women's Offense In Trouble Going Into The World Cup?
By Matt Moreno
By Matt Moreno
May 31, 2015
The U.S. women's soccer team tied Korea Republic on Saturday in a disappointing scoreless match. Will the US offense perform better in the World Cup?
SHOW TRANSCRIPT

It was supposed to be a tune-up before World Cup play, but the U.S. Women's National Team only managed a 0-0 draw against Korea Republic in an international friendly game Saturday.

Forward Abby Wambach told ESPN after the game: "Obviously not the result we wanted. We didn't play that well. ... To me, this is super normal. I'm not freaking out. We're not in a bad position. Everybody, don't worry. We're going to be fine."

But judging from several headlines, there was a bit caution from writers after the game, with many saying the lack of offense was most concerning.

And the loss of starting forward Alex Morgan didn't help. Morgan's been out with a knee injury for nearly two months now and watched Saturday's game from the sidelines. Morgan is expected to contribute to the U.S.'s World Cup efforts, but coach Jill Ellis said she'll need to build up her time in the early games after the lengthy absence. (Video via NBC Sports)

On the surface, things look a bit daunting for the national team, but the U.S. squad is still among the favorites to win the World Cup since the team's last win in 1999.

The team finished as World Cup runners-up four years ago in Germany and return many of their offensive weapons for this year's games in Canada.

A writer for NBC says the U.S. team is deep, especially at deep at forward, but that wasn't on display Saturday because Morgan and midfielder Megan Rapinoe were both injured.

And ESPN's Jeff Carlisle, despite this cautionary headline, says the World Cup send-off game can be tough to gauge. "Players want to gain sharpness, but they want to avoid injury as well. They also don't want to completely tip their hands as to how they'll operate when games really matter."

The U.S. will kick off World Cup play June 8 against Australia.