Is Tiger Woods Overshadowing Jordan Spieth At The Masters? 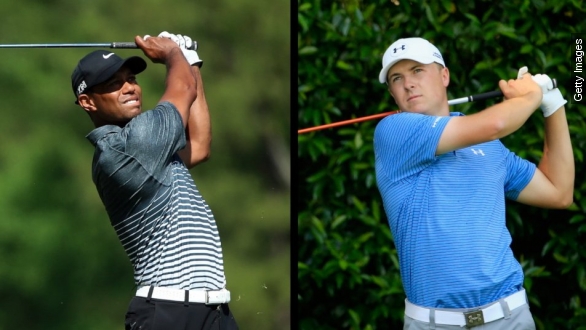 At just 21 years old, Jordan Spieth is killing it at the Masters.

Spieth continued his record-setting performance Saturday, shooting 2-under on the day, finishing 16-under overall and 4 ahead of his closest competitor, 2013 Masters winner Justin Rose.

The fact that Spieth, the No. 4 golfer in the world, is atop the leaderboard isn't terribly surprising.

CNN named him in its list of who-to-watch during last year's tournament, so he's been on map for some time now.

But he's perhaps not getting as much love as he deserves, due in part to big names like Rose, Rory McIlroy and Phil Mickelson within striking distance of Spieth atop the leaderboard. Oh yeah, and then there's Tiger Woods, too.

"The 21-year-old is back at it. We start first though with Tiger Woods. What a weekend for him," said a WZVN correspondent.

"I wrote a column a few days ago after Jordan's first round, comparing this to 1997 and Tiger Woods. There's a lot of similarities," said GolfChannel.com's Rex Hoggard.

Despite falling out of the top 100 rankings last week for the first time in some 20 years, Woods' strong performance this weekend is getting plenty of attention. So is his 1997 performance.

Woods became the youngest player to win the Masters in '97, his first major championship. Fast forward 18 years, include Woods' victories at three additional Masters' tournaments, and you can see why it's tough to shake that '97 victory.

Maybe this is the beginning of Spieth's historic run, too.