Is The World Ready For Another 2004 Indian Ocean Tsunami? 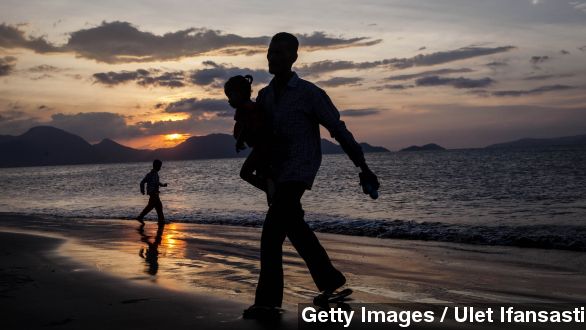 SMS
Is The World Ready For Another 2004 Indian Ocean Tsunami?
By Jake Godin
By Jake Godin
December 26, 2014
Ten years ago, the world's worst tsunami devastated nations bordering the Indian Ocean. How prepared is the world for another one of a similar scale?
SHOW TRANSCRIPT

December 26 marks the 10th anniversary of the 2004 Indian Ocean tsunami.

Triggered by an undersea megathrust earthquake, the tsunami was the deadliest in recorded history, resulting in more than 225,000 deaths and the displacement of 1.7 million people in 14 countries. (Video via BBC & YouTube / geoffmackley)

The majority were in Indonesia, Sri Lanka, India, and Thailand.

Ten years later, are these countries prepared for another tsunami of this scale? (Video via Thai Rath)

More than 10 million people live within a mile of the coast in Southeast Asia alone. (Video via ThaiPBS)

“I’m 90 percent confident that we will be able to keep things under control,” a Thai official told CCTV.

The $450 million Indian Ocean Tsunami Warning System costs between $50 million and $100 million per year and is running out of money. (Video via NOAA)

Of the nine ocean buoys meant to detect tsunamis, some have gone missing or been vandalized. (Video via Vimeo / Michael Freitas)

Warning systems funded by the Germans have been stolen or improperly installed.

A 2012 earthquake that did not trigger a tsunami left streets in the Indonesian city of Banda Aceh clogged with vehicles as people fled for the hills instead of designated evacuation centers.

And officials say there are still some “last-mile” issues needing resolved so warning systems can reach more remote communities.

Compared to 2004, the United Nations says the region is better prepared. But there’s still room for improvement — specifically with education.

So is the region prepared for another tsunami on the scale of the one in 2004?

This video includes images from Getty Images and an image from Jean Bailargeon / CC BY NC SA 2.0, as well as music from Senyawa / CC BY NC SA 3.0.