Is The Recent Media Spotlight Bad For Hillary Clinton? 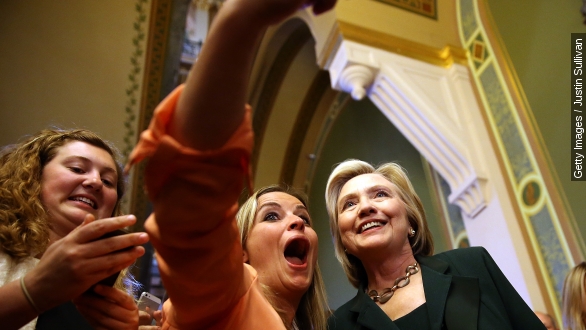 It might be hard to believe, but it hasn't even been a week since Hillary Clinton made that announcement. (Video via Hillary for America)

In the intervening days — yes, days — Clinton has been the focus of a lot of scrutiny. (Video via WHO-TV)

Outlets have looked into claims about her ancestry — Clinton has claimed her grandparents were immigrants, when records show only one was.

And they've looked into her tipping habits after the Republican owner of the Chipotle Clinton ate at earlier in the week told Bloomberg she didn't leave a tip on the bill for $20 that a friend paid. (Video via WNWO)

Then there was the whole fact that Clinton eating at a Chipotle was a story.

"Not quite sure why Hillary eats Chipotle is news. I mean, who wouldn't eat at Chipotle? It's the freshest Mexican this side of the border," Jon Stewart said on "The Daily Show."

It almost seems like Clinton news has overshadowed coverage of all of her Republican rivals combined, despite the fact that Clinton's announcement was arguably the most predictable. (Video via The New York Times)

Some analysts have made the argument that by running virtually unopposed for the party candidacy, Clinton is missing out on the rigors of a heated primary that could prepare her for the broader presidential campaign. (Video via CNN)

But it's also possible that because she doesn't have other serious Democratic contenders running against her yet, there's nobody else to take a share of the media attention. (Video via MSNBC)

And if this week is anything to go off ...

This video includes images from Getty Images and music from Deal The Villain / CC BY NC ND 3.0.