Is The Media Suggesting We Alter The Second Amendment? 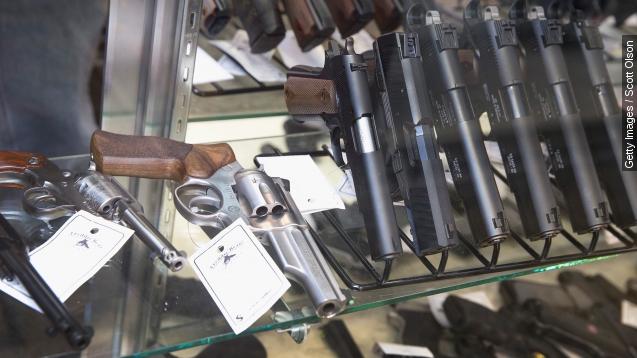 SMS
Is The Media Suggesting We Alter The Second Amendment?
By Cody LaGrow
By Cody LaGrow
December 4, 2015
Some media outlets say changing the right to bear arms is the only way to see real results.
SHOW TRANSCRIPT

The recent shootings in the U.S. have put the right to own guns under the Second Amendment in question.

The amendment states, "A well regulated militia, being necessary to the security of a free state, the right of the people to keep and bear arms, shall not be infringed."

An associate justice wrote in The Washington Post that adding five words would better explain that not just any individual has the right to own a firearm: "A well regulated militia, being necessary to the security of a free state, the right of the people to keep and bear arms when serving in the militia shall not be infringed."

Still, the Supreme Court interpreted the law of the land to recognize that yes, an individual, not just a militia, has the right to bear arms.

Others suggest the Second Amendment is an outdated law no longer applicable in modern society.

"The Second Amendment, with its emphasis on militias and hunting and with no mention of self-defense, has outlived its usefulness," Harvard Law professor Alan Dershowitz said.

Even local affiliates are offering opinions.

"The only way to have significant gun control is to change the Second Amendment of the Constitution. ... Do you believe the Constitution is going to change? Me, neither," WHDH's Andy Hiller said.

It raises an interesting debate over American law that perhaps is best summarized by The New Yorker's Jeffrey Toobin in a piece he wrote shortly after the Newtown shooting. "The law of the Second Amendment is not settled; no law, not even the Constitution, ever is."