Is The ISIS Threat To The U.S. Overstated? 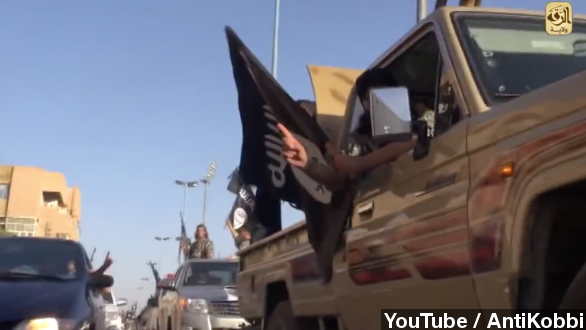 Intelligence officials keep saying there's no evidence to suggest ISIS is plotting some large-scale, 9/11-type attack on the U.S.

U.S. HOMELAND SECURITY UNDERSECRETARY FRANCIS TAYLOR VIA MSNBC: "DHS is unaware of any specific, credible threat to the U.S. homeland from ISIL."

Yet this is what we keep hearing from members of Congress.

REP. MICHAEL MCCAUL VIA ABC: "This is the greatest national security threat since 9/11."

REP PETER KING VIA NBC: "ISIS is a direct threat to the United States of America."

SEN. LINDSEY GRAHAM VIA FOX NEWS: "This president needs to rise to the occasion before we all get killed back here at home."

Given those warnings, along with some alarmist media coverage, it should come as no surprise nearly half of the country thinks the U.S. is in greater danger of a major terrorist attack now than it was before Sept. 11. Many intelligence analysts would say that's an overreaction.

DANIEL BENJAMIN, FORMER U.S. AMBASSADOR-AT-LARGE VIA CNN: "There's no question it's a destabilizing threat to the region, but its threat to the homeland is quite limited."

We've heard plenty of comparisons between ISIS and the masterminds of 9/11. And there are similarities. ISIS is, after all, a former Al-Qaeda affiliate. (Video via YouTube / AntiKobbi)

But when you compare ISIS to how pre-9/11 Al-Qaeda operated, a very different picture emerges. Bin Laden's group had already pulled off major attacks around the world, including the first World Trade Center bombing in the U.S. (Video via Al Jazeera / History Channel)

So far, ISIS hasn't demonstrated it's capable of anything on that scale in the U.S. (Via YouTube / المهاجرين والأنصار)

ISIS not only lacks the ability, it appears to lack the motivation to mount a major attack on the U.S. The group is pretty preoccupied in Syria and Iraq fulfilling its stated goal of trying to create an Islamic caliphate.

As The New York Times reports, the ISIS propaganda machine "has strikingly few calls for attacks on the West." The notable exceptions being the threats made in the beheading videos.

Experts say the bigger concern is an individual carrying out a lone wolf attack, something like we saw with the Boston Marathon bombings. (Video via The Boston Globe)

And while such an attack is certainly plausible, it's more likely ISIS will want to retain those fighters, according to Human Rights First's Michael Quigley. He wrote for The Hill, "[ISIS] cannot yet afford to have those fighters depart the battlefields in Iraq and Syria, for to do so jeopardizes their most important objective — their raison d'etre — the Islamic State itself."

For his part, here's how the president has characterized the ISIS threat.

OBAMA VIA THE WHITE HOUSE: "If left unchecked, these terrorists could pose a growing threat beyond that region—including to the United States."

The key word being could. As The Atlantic's Peter Beinart writes, "The critical question, as the U.S. launches a war against ISIS that will likely take years and have myriad unforeseen consequences, is what 'could' actually means."