Is The Future Of Contraception Male? 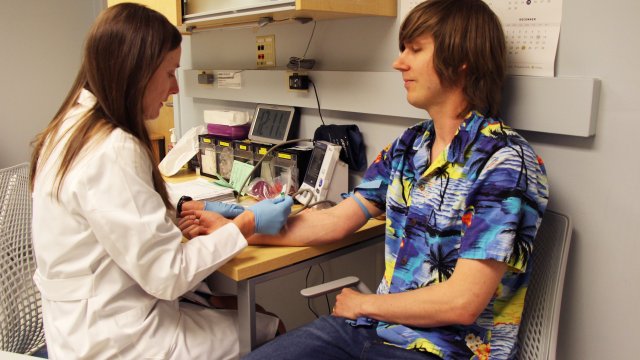 Contraceptives come in lots of varieties: the pill, the ring, the diaphragm, the IUD, injectables, tubal ligation. Notice a theme? Those are all for women. In men, there's a grand total of two options: the condom and vasectomy. Twenty-five percent of contraception worldwide relies on one of the male methods. The failure rate for condoms is 15-18% with typical use. Vasectomies tend to be more fool-proof. Scientists are testing ways to balance out the contraceptive imbalance.

There are two types of male-focused research: hormonal, which involves synthetic hormones that temporarily stop development of sperm; and non-hormonal, which blocks sperm. The hormonal contraceptives being researched are a gel applied daily and absorbed through the skin, a pill taken daily, and an injectable that is longer-lasting. All involve a combination of testosterone, which induces sperm production, and the synthetic form of the female hormone progesterone, which reduces sperm to low or nonexistent levels by blocking natural testosterone. That's why testosterone has to be added — otherwise the female hormones could suppress sex drive and cause headaches, depression, acne and fatigue.

How long before one of the hormonal treatments shows up in the pharmacy? A decade seems to be the consensus. More testing is needed.

On the non-hormonal track, there's a reversible procedure: injecting a chemical that blocks the vas deferens, which is the tube that carries sperm to the penis. The chemical also kills sperm and is effective almost immediately. When it's time to have a baby, another injection can wash out the vas deferens. There's also an intra-vas device, or IVD. In this method, a "plug" is injected into the vas deferens. It filters out sperm and can be removed later. When will these be available? No time soon. Again, more research is needed.

Then there’s the issue of men actually using contraceptives. Most say they would — a survey of males aged 18-50 in nine countries found that 55% would be open to a male hormonal contraception. On the other hand, a survey of U.S. men found that they are twice as likely to prefer a non-hormonal method (80%) by a landslide (38%).